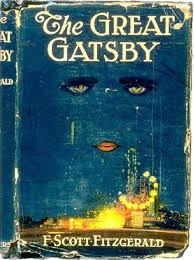 The Great Gatsby by F. Scott Fitzgerald and published by Simon & Schuster in 1925. Notes and preface by Matthew J. Bruccoli.

Let me just say, one of the best things about reading this book was its history in the forward. Not that I would wish this on anyone, but knowing that The Great Gatsby–widely accepted as the best American novel of the 20th century–had such inauspicious beginnings, well… Let’s just say it made me feel both okay and renewed my sense that success in writing and everything includes, not just talent, but a little fairy dust, as well. You aware of this story? Let’s just highlight: It took thirty years for The Great Gatsby (which, incidentally, Fitzgerald meant to call The Red, White and Blue) to go from a moderate run, to out-of-print, and then back again to a student’s edition during a 1950s Fitzgerald revival. By then, Fitzgerald was dead. (He was too young. If he hadn’t died, we would probably have a few more great American novels, including The Love of the Last Tycoon, which was unfinished at the time). And now? “the most widely read, translated, admired, imitated, and studied twentieth-century work of American literature.” Incroyable!

And here is my favorite Fitzgerald quote from this edition: “I wish now I’d never relaxed or looked back.”

Sure, Fitzgerald was the alcoholic we all supposedly knew him to be, but he was mostly a serious writer and also part of the French expatriate scene. He published over 160 short stories (!) and was working on another great novel, The Love of the Last Tycoon, when he died prematurely in his forties. He was a very careful writer, big on re-writes and on thinking every thing through, very deliberate. I recall reading once that he went through hundreds of titles for The Great Gatsby before settling on the one that was used. And even at that, he tried to change it to Under the Red, White and Blue while it was at the presses. I like what Bruccoli says at the  conclusion to his preface, “Literary miracles are the work of writers who come closer than other writers to expressing what is on their minds through innate genius augmented by control, technique, craft” (pxvi).

I have to admit that another thing about the Great Gatsby gives me hope at the author’s expense. Mistakes. They’re here and there. Of course, someone recently squashed my sheer joy over this by pointing out that in the twenties there was hardly the internet and now we have no excuse, but I am just going to ignore that and say that the few obvious errors coupled with literary errors (and writing “retina” instead of “iris” or “pupil”) has me smugly overlooking the five or six errors which I have highlighted in my personal copy of Benevolent. Plus, I am still alive, so I can change those and move on and let other people discover more and other errors.

Of course, The Great Gatsby is a wonderful, beautiful piece of American literature, and I thoroughly enjoyed reading it. None of it (or at least not much) was lost to me, as a reader ninety years later, although the modern reader has to overlook some of the literary devices that were once novel and are now cliche (such as the story-within-a-story thing, or the revealing dream(s)). I enjoyed not only the prose and the story, but also the themes of love, time, and hope.

The writing style is very clean, in most ways, but also includes passages of startling beauty. Sometimes I was fully immersed, and the scene had nothing of the foggy, negative feel I often find in those types of passages. Like, “At the grey tea hour there were always rooms that throbbed incessantly with this low sweet fever, while fresh faces drifted here and there like rose petals blown by the sad horns around the floor” (p158).

It’s funny, I am torn about this book after reading it simply because it doesn’t rise to my personal all-time-favorites, but it is such a wonderful book. And, actually, I feel exactly the same way about the 2013 movie. I think then, that my real critique just boils down to personal preferences, and I wish that instead of students being forced to dissect this classic, adults everywhere would be picking it up for a thoroughly enjoyable read.

And about the movie, since the whole reason I read this Best Book at this time was because it is up for an Oscar or two this March. It was excellent, and I am disappointed (with all the Australians) that it is not up for a best picture or an acting award, or even cinematography. When I turned it on, I did not know who the director is (hello, ADHD), but I knew almost immediately that it is either Baz Luhrman or a Baz Luhrman copycat. It’s Baz. In that case, it’s no wonder I liked it. I love much of Luhrman’s work; his saturated scenes, his exquisite and artistic visuals, his clean acting and timing, his painstaking attention to music and costuming. Kevin was off-put by the rap music, but when taken as a whole piece, I enjoy it for its emphasis and appeal. I mean, think of Shakespeare’s Romeo and Juliet with its inclusion of guns, or Moulin Rouge passionately riffing on the Beatles. I can say most people will enjoy this movie, and–despite the differences–will enjoy it right after they read the book. (Note: the movie stays remarkably close to the book, anyhow, especially in the particular lines (but they did omit my favorite scene and one of the best relationships).)

“There was so much to read for one thing and so much fine health to be pulled down out of the your breath-giving air” (p8).

“Life is much more successfully looked at from a single window, after all” (p9).

“‘Let us learn to show our friendship for a man when he is alive and not after he is dead,’ he suggested. ‘After that my own rule is to let everything alone'” (p180).

Currently reading How Nonviolence Protects the State, by Peter Gelderloos and My Bright Abyss, by Christopher Wiman.

With my son, I'm reading Walk Two Moons by Sharon Creech and reading ahead of him: Amal Unbound by Aisha Saeed and In the Reign of Terror by G.A. Henty.

The next books to review are Little, Big by John Crowley and Walk, Sit, Stand by Watchman Nee.