It has been a month of the unexpected, driven by the weather and that nasty flu bug. I’m sure we were in the same boat as lots of people. Work-wise, it was Self Help month here on the blog, and I read only two books the whole month (the second, in one day). See here for those reviews.

More importantly, I finally got around to making a production timeline and then plugged in the books I am currently working on. I imagine that lots of publishers have something like a production timeline, and I figured–even though Owl and Zebra Press is small–that it would be awesome to take what happened with our first book and make a spreadsheet. Then, when another book is begun or idea proposed, all we have to do is plug the project into the spreadsheet and voila!, we have an approximate timeline (and some built-in deadlines) for all things great and small. Even a publication date! And a launch date! And a date by which to send thank yous to featured bloggers! (See? Great and small.) I am so happy with this new spreadsheet, that I have to force myself to close out the file and keep it that way, or I waste long swaths of time just clicking around on it and dreaming of those days in the future…

Along the same line, I plugged The Night of One Hundred Thieves in with a finish-first-draft deadline on January 31st. That came and went, and the first draft is marinating while I have a couple pair of eyes looking it over just to make sure its worth the paper its printed on. Launch date? July.

Now, on to entertainment. Due to a strange more-than-a-week when the kids were first feverish and then banned from a snowy school, we spent hours and hours snuggled up on the couch having an outright Harry Potter movie marathon. For a brief review of the series, see the bottom of the Harry Potter book series review. It was fun to do them all in quick succession. Believe it or not, we caught things we had never caught before, and were better able to differentiate between them and the books.

Frances Ha (2012). 2012, although I’m pretty darn sure it’s up for an Oscar this year. In fact, it was the only movie we could find that is up for an Oscar and is also available through Redbox, Netflix, Amazon Instant Prime, or Hulu Plus. Makes me (yet again) miss the good ol’ days of the corner video rental store. And to get even Frances, we had to type about forty movies into our remote on three (four) different sites. Oi. Sorry; to the point. I really enjoyed this movie. It is one of those the sits right on the edge of wanting to watch it once and wanting to go buy it so I can watch it over and over. The story itself?: okay. The good karma in this flick is all about the main character and the actress who plays her (who is also the writer). In two words: extremely lovable. I also enjoyed the portrayal of affectionate relationships, especially female-female, that did not have to lead anywhere sexual. And just as a note: not for people who only enjoy blockbusters. It’s–ahem–quirky.

Robot and Frank (2012). Ehn. This movie had so much potential that I feel it did not deliver on. Great idea. Great acting. Solid cinematography. But somewhere in there, a “feel good”-despite-the-hard-times flick melted into a slow and depressing movie. I think the issue was the pacing and timing.

Bridge to Terabithia (2007). Somehow Kevin and the kids had never seen this, so we rented if for family movie night a couple weeks ago. Somehow, I have also never read the book, and could only vaguely remember some of the scenes while Kevin could only remember a “sad” feeling in relation to the book. Boy, were we all in for it, pizza hanging from our dropped jaws, as we came toward the end of the movie. We had wailing and balling and lots of questions about death. Yes, that is sort of a spoiler, but I’m pretty sure it is in your favor to know–before watching it with the kids–that it does not end happy, at least not without a lot of bittersweet. Reminded me very much of My Girl, which was a favorite when I was a kid. Also, our kids were disappointed in the ratio of imaginary to real scenes; they wanted more trolls and magic, etc. Good, solid, movie, but bring your tissues.

Jack Reacher (2012). When all the movies on our must-see list were no-gos (see above review of Frances Ha), we went for this one. Even more “ehn” than Robot and Frank. Not that I expected any different. Everything came at you clearly discernible from a mile away.

The Truman Show (1998). For some reason, Kevin and I had recently and independently said we wanted to re-watch The Truman Show. You know, that sort of thing comes up in this day and age of reality shows and missions to Mars and whatnot. We were not disappointed by our old feelings of satisfaction. It is a great movie, and one that promotes discussion and thought as well as in-the-moment entertainment.

The Invention of Lying (2009). This is one from my own, personal collection. Despite that apparently if lying had never been invented (or even pretending, concealing, exaggerating, or acting; all sorts of lying) we would all be as straight-forward about sex and marriage as about anything, I do not like opening up the movie with Jennifer Garner quipping about masturbating off screen. However, the whole idea of this movie is fascinating, and watching it play out is so interesting I could watch it again and again. Of course, I am reliably offended by the assumption that without lying and pretend we would not have a concept of God, but… well, just repeat the ending to the last run-on sentence. Plus, as long as you don’t get too much of him, Ricky Gervais is really funny. A discussion film. 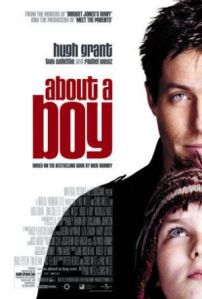 About a Boy (2002). Another one from my own collection. For personal reasons, I am drawn to films with bipolar characters and themes, and this is one that is both serious and light, sad and warming. I love how the look and feel of these characters is true–not to Hollywood–but to what you might find in people just like them. Perhaps a tad stereotypical, but overall something like Notting Hill meets Jacqueline Wilson.