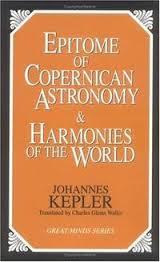 Epitome of Copernican Astronomy & Harmonies of the World, by Johannes Kepler, translated by Charles Glenn Wallis, and published in 1995 by Prometheus Books for its Great Mind Series. (The goal was only to read Harmonies, and I read only parts of Epitome, when referenced.)

When I ran the randomizer on my list of like a million books, I just knew the first one would be some technical doozy. And the Debbie Downer inside of me was not wrong. Oh well; plenty of enthusiasm for my new project of reading through a big chunk of the world’s best and most influential books, so I can do this! Remember, one of my rules was that I would make it through every book word-by-word except for technical tomes.

Right away, I learned something that I put to use. If I am going to read these kinds of books, I need to get annotated versions with explanations in close-to-laymans’ terms. Not only are Harmonies of the World‘s  topics completely in fields that I don’t understand at this level (astronomy, math, and music theory), but the language usage is archaic and the history of the situation is lost on me. Therefore, I immediately ordered a preview copy of one of my next books–a Newton title–in its soon-to-be-released commentary version. Lesson learned.

Now, for the book itself.

I think we need to start with some history. Johannes Kepler was a key figure in the 17th century scientific revolution which included Isaac Newton’s theory of gravity, Galilieo’s world, Copernicus’ universe, and eventual shifts in the world of math, physics, astronomy, biology, medicine, and chemistry, which transformed our culture and views of nature. Kepler was officially a teacher and a mathematician to royalty, as well as an assistant to astronomer Tycho Brahe. He improved the telescope, married physics with astronomy (as opposed to astrology), and believed that “God had created the world according to an intelligible plan that is accessible through the natural light of reason” (“Johannes Kepler”, http://en.wikipedia.org/wiki/Johannes_Kepler).

Kepler’s first published work, Mysterium Cosmographicum, began his work as the updater of Copernican theory. After studying under Brahe and writing other works, he shifted his concentration to harmonies, or “music of the spheres,” which was an idea explored earlier by Pythagoras, Ptolemy, and many others. Music of the spheres is defined as “an ancient philosophical concept that regards proportions in the movements of celestial bodies—the Sun, Moon, and planets—as a form of musica (the Medieval Latin name for music). This ‘music’ is not usually thought to be literally audible, but a harmonic and/or mathematical and/or religious concept” (“Musica Universalis, http://en.wikipedia.org/wiki/Musica_universalis).

Kepler himself considered Harmonies of the World (aka. Harmony of the World or Harmonices Mundi) to be his greatest work. He certainly seems excited in his writing. The basic premiss is that there are harmonies, or congruence, in all of God’s creation, which Kepler limits in his proving to three-dimensional geometry (later known as Kepler’s solids), relationships of magnitude, music, and the Solar System. He builds his arguments on the Platonic Solids, irrational numbers (think pi), and harmonic intervals (like the ratio of a C to its octave and a fifth). Are there harmonic ratios in the distance between planets? Conclusion: no. How about their velocities? Well, yes, it does appear so, both individually and converging and diverging. And since movement best approximates music, this makes perfect sense to Kepler.

After Kepler sent Harmonies to the printer, his work came to another conclusion: “Kepler discovered that the ratio of the square of a planet’s period to the cube of its semi-major axis is constant for all orbits. Today, we know this relationship as Kepler’s Third Law. Many consider it to be one of the most elegant results in all of astronomy” (“Kepler’s Harmonices Mundi“, http://www.keplersdiscovery.com/Harmonies.html). Also, “when conjoined with Christian Huygens’ newly discovered law of centrifugal force it enabled [later, in the 1660s] Isaac Newton, Edmund Halley, and perhaps Christopher Wren and Robert Hooke to demonstrate independently that the presumed gravitational attraction between the Sun and its planets decreased with the square of the distance between them. This refuted the traditional assumption of scholastic physics that the power of gravitational attraction remained constant with distance whenever it applied between two bodies” (“Johannes Kepler”, http://en.wikipedia.org/wiki/Johannes_Kepler).

Kepler was not overly well received in the immediate. His theories were largely ignored by those in prominence in science. After some well-documented, third-party tests however, some scientists began pulling for a Keplerian model of astronomy. By 1630-1650, his was the most used textbook in astronomy, which set Kepler up to be the building block for Newtonian theory and its culmination in Principia Mathematica (which, by sheer coincidence, I will be reading this summer).

Besides all the boring numbers, the constant use of the run-on sentence, and the obvious issues with advances of science (like, he thinks there are only six planets and the universe orbits around the sun), it was interesting to witness his pure enthusiasm and conviction.

I would not recommend this book for reading, unless you are or are studying to be an astronomer, physicist, geometrician, science historian, or musical theorist. And if you really want to read it, accompany it with some sort of commentary or history. It consists largely of equations and “almost”s, stretching and fudging. (For example, Kepler says that because the earth sings “MI FA MI,” it is clear it is a place of MIsery and FAmine.) I think, with a much cleaner translation, it would be at least readable by the layman, but would still abound in equations. I think the following quotes will be enough for you:

“I commence a most sacred discourse, a most true hymn to God the Founder…. first to learn myself, and afterwards to teach others too, how great He is in wisdom, how great in power, and of what sort in goodness…. He can do by His unconquerable power all that He has decreed” (p169).

“…I brought it to light and found it to be truer than I had ever hoped, and I discovered among the celestial movements the full nature of harmony…” (p169).

“The very nature of things, in order to reveal herself to mankind, was at work in the different interpreters of different ages, and was the finger of God…” (p170).

“For the Creator, Who is the very source of geometry and, as Plato wrote, ‘practices eternal geometry,’ does not stray from His own archetype” (p177).

“…God has established nothing without geometrical beauty…” (p185).

“…they are doing nothing else in the business except to play the apes of God the Creator and to act out, as it were, a certain drama of the ordination of the celestial movements” (p198).

“Accordingly the movements of the heavens are nothing except a certain everlasting polyphony (intelligible, not audible) with dissonant tunings” (p208).

4 thoughts on “Book Review: Harmonies of the World”