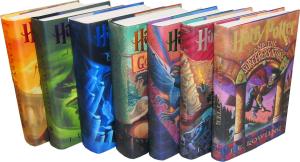 As many times as I have mentioned Harry Potter or J. K. Rowling, I have not officially done a review of the book series. So in honor of October, Halloween, and our recent trip to The Wizarding World of Harry Potter at Universal Studios, Orlando; here it is.

The list of the books, from first to last:

It is no secret that I like these books. It took years to convince me to read them, and I only picked up once my daughter requested that we read the second one aloud at bedtime. From there, I moved quickly through the rest of the series and before I knew it, we had a Harry Potter birthday party, owned all the movies, and were carousing on Flight of the Hippogriff. How did it happen?

I’m not sure how is as important as what, here. You see, I’m not the only person sucked into this series, but only one of millions, completely unoriginal. Harry Potter is arguably the most successful book series ever written, popular (and fiscally dominating) with not only children, but with people of all ages. I am not as devoted to it as to Anne of Green Gables, but for the past three years I have read the complete series once a year, at a point when I most needed to escape.

Now, why? Harry’s setting is a perfectly encapsulated world, both like and unlike our own in equal measure, where one can escape for seven easily-readable books. Total immersion. Characters are fully drawn and likable (or hatable, as the need arises). Themes involve everything from death to romance to coming-of-age. And, most importantly (I think), nothing is left untied. What comes up in the first sentences resolves with the last few pages. Nothing changes. Nothing is inconsistent. It’s the perfect package. (Whereas miraculously nothing comes from nowhere, there are some plot lines that are extraneous and don’t eventually blossom, like Hermione and elf rights, or the Deathly Hallows.)

The main problem? Writing style. Rowling is only, prose-wise, a mediocre writer. If you are used to high literature, this can be distracting. Plot-wise Rowling is the best of writers. And character-wise, she has created some of the most memorable and iconic characters in all of literature. Plus, she’s made a ridiculous amount of merchandise deals and money. What any of us authors wouldn’t do to be her.

A secondary problem? Witches. Plenty of people won’t touch this series with a ten foot pole because they believe the occult is not a trifle. However, others have found it appropriate to draw a distinction between the true occult and the fantasy genre. Fantasy has a long history of using legendary characters–like witches–to open the imagination to possibilities and stand for moral points. These characters have become typecasts for the collective imagination and, in most cases, are no more like a “real” witch than Wilbur is like a real pig. You have to decide for yourself if you can go along with that.

One of my major beefs with this series (and something I tell myself I will never do) is the increasing age of the targeted audience as the series progresses. Sure, I understand that Harry is eleven to start and eighteen by the time it ends, but I don’t believe this makes it necessary to age the audience and the appropriateness level. This might have worked when Rowling was releasing and her preteen readers were aging themselves, but now, with the whole series on the bookshelf, it becomes problematic for young readers who start the series and are aged out. Aw-kward.

So, in short, if you haven’t encountered Harry Potter already, you are the only one left. If you are avoiding it, I would recommend that you stop fighting the current and make yourself finish the first two books. (The series improves as it continues.) If you have a moral objection, so be it. Otherwise, sit back and enjoy the ride.

This is the butterbeer that FOX news released with the launch of The Wizarding World of Harry Potter.  (By the way, the park is great fun, if you happen to be in Orlando.) It is the recipe that I use each Halloween and then my family anticipates eagerly. 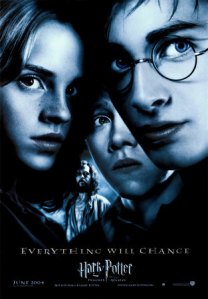 And a word about the movies. I appreciate them, I am addicted to them, I don’t love them. They are one of the only successful complete series ever made, start to finish in a timely manner. They have some issues. One, they had to be changed to fit the new format, and I miss a lot of the subtleties and minor plot lines/characters. (Their biggest failing is hands-down the portrayal of Ginny Weasley, who barely ever speaks and is sad, wooden, and hopelessly serious, not like the Ginny in the book.) Two, they were thrown around between directors, and combined with the aging characters and the increasing length of the books, they can be very different, especially in tone and age-appropriateness. What they do provide is a stunning display of special effects, a ridiculous cast of famous British actors, and a visual for the alternate world of Harry Potter. Watch them if you want, or don’t if you don’t. The books are still better.

Read Harry Potter in its entirety, again, fall of 2018. I am amazed by how much I learn each time I read it and how much there is still to enjoy and discover. This time, I was amazed to notice Easter eggs that you just can’t notice until the—what, sixth?—read. Until you really know the details of the story, you can’t appreciate all the early references, foreshadowing, and detail involved in Rowling’s storytelling.