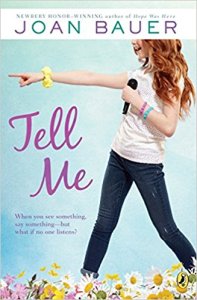 I read this book some time in 2017. It has sat on the list of reviews to write since then. The problem is, it is a fairly forgettable read. I mean, it accomplishes what it is, I think, but I am no teenage girl.

Tell Me, written by Joan Bauer of young adult literary fame and holder of a Newbery Medal as well as other awards, is meant for teens. While Bauer mixes up her male and female leads in her writing, I would say that this one is distinctly feminine. Bauer is known for writing serious themes in a light-hearted style, a la Jacqueline Wilson. I have not read any of her other books, so I speak only to this one, which my (at the time) twelve-year-old daughter really enjoyed.

What I appreciate is that it introduces the concept of human trafficking to young people who are beginning to look obliquely at the troubles of the world. It also deals with divorce, which as much as it might be overdone these days, is a concept many young readers are at home with. It is also very readable. You have friendship, family, romance, small town, coming-of-age, and criminal/mystery, in a pretty short format.

I did not, on the other hand, think it was a great book. It felt forced at times, and perhaps a little formulaic. I also never felt the real tension of the situation with the trafficked girl, so it was hard to identify with the main character’s urgency. There were some cute things, but nothing rose up much higher than a murmur.

I haven’t more to say. A good beach read for a tween girl, especially if you care about the victims of human trafficking and want her to, as well. Not especially notable, though. I wish I had something better to recommend for the subject matter. I might, some day.