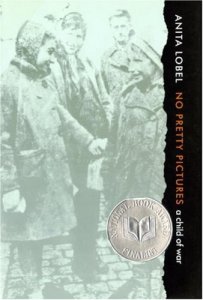 o Pretty Pictures: a Child of War, by Anita Lobel. Published by Greenwillow Books, New York, in 1998, with an unfortunately drab and unexceptional cover (especially considering that the author is known as a children’s illustrator). The more recent 2008 reissue cover is much better.

DISCLAIMER: I do not see this as a children’s or even YA book. It takes quite a bit of maturity to digest the contents, especially considering her struggles with her faith.

Let’s start with the author, because that is where I started. In fact, it was with her husband, the author of the Frog and Toad series that got me here. My son and I both have fallen in love with the Frog and Toad series over the past several months, and so I gathered in as many Arnold Lobel books from the library as I could find. Then, with the acquisition of On Market Street, I began to notice the other half of the couple, Anita Lobel. So I gathered her books, as well. This came home with me from the library.

Anita Kempler was born in Poland just before World War II, which would prove to be important because she was Jewish and the Nazis were on their way. The story of her childhood in the Holocaust is told in No Pretty Pictures, and I don’t want to spoil it for you, but one by one her family disappeared as she and her brother managed to cling together and almost magically survive. She ended up in Sweden and then America, where she went to college to receive a BFA and where she met her husband. In the 50s and into the 60s, she was a textile designer. Her first book, Sven’s Bridge, was published in 1965. Lobel has won a Caldecott Honor, Best Illustrated Books, and has been both a writer and an illustrator throughout her long and successful career in children’s books.

No Pretty Pictures–Lobel’s autobiography about her experience as a Polish Jew in Europe during the reign of the Nazis–is the outlier, as far as genre. Still, it won her a spot as a National Book Award finalist. You sort of get the impression that she wrote the book because it’s a story she’s often been asked to tell and record, and it ends up a sort of no-nonsense narration. As I started it, I wasn’t sure what to expect.

I couldn’t put it down. I kept reading when I should have been sleeping. And–most telling–I kept talking about it for weeks afterward. It isn’t so much the style or even the scope of this story (I sort of thought I had out-read the subject, to be honest), but the complete transparency. The events are what they were, there’s little to no emotional overlay, no playing around, no fencing things off.

Of course, Lobel’s experience of the war is not exhaustive or comprehensive, but she basically experienced what you already know the Jews experienced. What is so fascinating about her story is four-fold. First, she experienced many different situations, from hiding out to running to being captured. She was in the ghetto. She was in a concentration camp. She was in a convent. She was in the countryside. She was in the city. Etc. Second, the detail with which she recalls her childhood and the events is absorbing and fascinating. You understand, right away, that she was always a bright and observant child, if not a perfect one. Three, she doesn’t hide anything. There were so many times that I poked my husband and said, “Have you ever thought about that aspect of the Holocaust?” Anecdote after anecdote, you will walk hand-in-hand with her as she relays about lice and thieves and diarrhea and old potatoes and–unbelievably enough–the occasional exploitation and weary disconcern of other Jews toward two wandering children.

Fourth, this is an incredibly humane book. And I don’t mean that it’s “nice to people,” I mean that it has a tremendous grasp of and honesty about people. She deals very little with the Nazis, but explores the multi-faceted depths of herself, her family, and her protectors. This means, at times, that you recognize both her foibles and also the sad inability of those who should have loved her best. Her nanny is perhaps one of the most conflicted characters I have ever read, fiction or not.

It’s bleak, but it’s also a little it wonderful. She never should have made it, and yet she did.

I highly recommend this book. It’s a nail-biter and a great study of the human character.

“Somewhere there must be a terrible place. A barren area with no light. With leafless trees and no blue in the sky. Where these words stopped being just words and became real things” (p9).

“Below us, above us, we felt the hushed lives of caged people. Waiting for something to change. Praying for rescuers. Even dreaming that the Nazis would lose interest, yawn, and go away” (p45).

“I didn’t know that from hunger one could cave into loss of consciousness, to hallucinations. It never happened to me” (p110).

“Somewhere, before Montelupi, before Plaszow, my brother and I had been forced to leave ourselves. Anchored in numbness, our bodies were nothing but two hungry, itching lumps” (p111).

“I pounced on the groaning board of words, of history dates, of stories, of poems, of the columns of sums to be calculated” (p169).

“But the language I used to speak so excellently when I took my first civilizing steps as a young girl has to be wakened from its veiled sleep” (p189).

“She worshiped the Holy Mother, mistrusted Jews, yet she protected my brother and me with the flapping wings of a demented angel” (p189).

“Or was she dragged along the ground like the woman in our transport to Plaszow? I can picture it. I will never know” (p190).