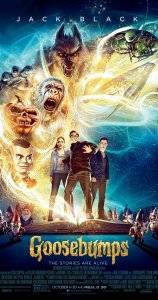 Goosebumps, the movie, released in 2015 by Sony Pictures.

There are a few things that I need to say before I get to this movie. The first is that I do not allow my kids to read Goosebumps or watch the show, because they are too scary (and possibly I have some other reasons). That said, I allowed my kids to watch this movie because it is not considered children’s horror (as the books are), but a comedic family movie. No blood. No deaths. Turns out, the movie is not a retelling of any of the Goosebumps books, but is a fictional-fantasy exploration of the author’s life, meshing his fiction with his work.

And how could a writer resist the plot of a writer’s characters coming to life and trying to kill everyone?

It ended up a little scarier than I wanted it to be. (While my children handle fantasy scary well–like Darth Vader, Dementors, and Ring Wraiths–the vengeful, magical (creepy!) dummy was a bit much.) Then again, there were no nightmares or further conversations needed, so I would say it skated the border pretty well, considering that it was a sort of tribute to the whole horror genre, from its characters, settings, and plot, to its classic ending.

Garnering fairly good reviews from IMDB and RottenTomatoes, as well as some critical acclaim, I would give this movie a “pretty darn good,” and possibly even add it to my kids’ DVD library. It reminded me a lot of Jumangi and Zathura (said to be spiritual sequels or some such nonsense), both of which we own. They all jive in tone, among other things. But–and I really hate to say this–the punchline was obvious to me from the beginning and I did not like Jack Black in the role of R.L. Stine. There was just something about his performance that took Black’s endearing goof and made it distracting and unfitting… maybe even forced. I don’t know. The real shining performances here were by the best friend and the aunt. Really funny stuff.

Then again, if I were R.L. Stine, I would be very happy with this movie (yes, the whole thing), especially with the easy-to-spot, fun cameo.

I’m guessing that if you have read tens or hundreds of Stine’s books, this movie would be even better, featuring many of his most popular characters. But since I only made it through one Fear Street and am still weary of lipstick to this day…

In short, if you like books (and why else would you be on this site?), grab your family and a bucket of popcorn, snuggle up, and enjoy.

Stine is most famous for his Goosebumps and Fear Street series, which are both horror stories for children (and YA). Stine is one of those especially prolific authors, with almost 200 books in his Goosebumps series and more than 300(?) books to his name. Born in the 40s, Stine didn’t publish his first children’s horror book until the mid-80s, although he had been writing humor since the age of 9 and working in children’s humor as an editor and at magazines, as well as writing books as Jovial Bob Stine. When laid off from Scholastic in the 80s, he decided to write full time and, shortly after, started writing horror. His first book was well-received, and Goosebumps started appearing in 1992. At a rate of 1-2 books per month, his career began in his middle ages, but has been prolific and has included a TV series, best-selling status, and the position of one of the best-selling children’s authors of all time.