In February, I joined something like 10,000 authors entering the Amazon Breakthrough Novel Awards contest. I did it with some reservations, because really I love self-publishing so much I am reluctant about a contract with anyone. However, a pay check and reader feedback–oh, and recognition–this is all important to my career. The catch with the ABNA: the first round (eliminating something like 90 per cent of the competition) is based solely on the pitch. So, just like most editors and agents these days, they make the major cut without reading a single word of your fiction. Takes me back…

Also, I attended the first in what may become a string of readings at Francesca’s dessert shop in Durham. They are happening on the third week each month, hosted by a guy I know, and without a personal invite and close proximity to my house, I probably wouldn’t attempt it. But so far, so good. I haven’t been to a reading jam in so many years I decided to just watch. In March I will be reading a novel excerpt from Benevolent and then hopefully making my way into excerpts from my current projects as the series continues.

Details? Third Sunday of the month (except Easter; that would be the fourth), 7:00pm at Francesca’s on Ninth Street in Durham. Readings under five minutes of any sort, but flash fiction especially encouraged. Feel free to come and read or just to watch.

I have decided to suspend movie reviews on this blog, because they don’t seem to fit the overall theme. Plus, I am drowning in content. I have so much to share about the writing and publishing experience on top of all the book reviews, I am just going to keep my movie reviews to myself, along with my social commentary (:)). I did want to take a moment to acknowledge that Philip Seymour Hoffman has died (which you undoubtedly already know). He was a personal favorite of mine, and is featured in several of my favorite films. I had always (once he outlived Twister) said he would be my first pick for a dream movie team. So sad that his brilliant career was cut short by the pitfalls of Hollywood and a famed life.

As for reading, I have read two books with my daughter for school book reports. The first was stipulated “science fiction,” so we picked up a copy of My Teacher Is an Alien in the town where the author is from (Syracuse, NY). For biography, we found Boy on our home shelf, peeking out of my collection of Roald Dahl.

My Teacher Is an Alien, Bruce Coville. Coville is a prolific writer of children’s science fiction and fantasy, with over 80 titles (plus short stories and anthologies), although My Teacher Is an Alien is one of his most famous titles (with the Sixth Grade Alien and Space Brat series). (I remember seeing copy of Alien way back from my own junior high experience.) Alien is number one in a short series that includes My Teacher Fried My Brain, My Teacher Glows In the Dark, and My Teacher Flunked the Planet. I didn’t expect much from the book, but I and my daughter were pleasantly surprised. Believe it or not, the book was fresh and creative, and the story fairly engaging. I think the ending is what made it a worthwhile read for me. Up until then, I was only okay with it. Definitely a recommend for any kids interested in alien fiction and just getting into chapter books. 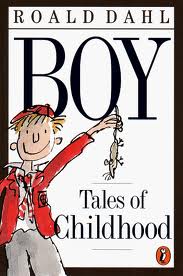 Boy, Roald Dahl. Roahl Dahl is a personal favorite author, the genius who brought us such greats as Matilda, Charlie and the Chocolate Factory, The BFG, Witches, The Twits, James and the Giant Peach, etc. Boy, his autobiography about his childhood, was on the shelf in the kids’ section (at our house), but I was a little afraid to read it with a nine-year-old. Not only did Dahl write for adults, as well, but his Omnibus (sitting right next to it) is clearly not for children. Heck, even his children’s literature is often not appropriate for sensitive children. But I love his stuff, so I read it out loud intending to edit as I read. It did need it, but not for the reason one might think: the difference a hundred years and a culture (we’re talking Norwegian/British) has on sensibilities and language can be profound. For example, there is an entire chapter on “fagging,” which is a term used for assisting an RA. Between the smoking and the boarding school abuse, it took some explaining to my children, but despite how appalled she was by the tyranny of the school masters and older children, my daughter really enjoyed the book (despite herself, I might add). Her project was on the “Childhood Pranks of Roald Dahl,” which highlights what is especially enjoyable about this book: seeing from where all his amazing ideas sprouted.