I haven’t really jumped on the Kate DiCamillo train, though it seems everyone else has. I suppose that she has been on my radar, just out of sight, for several years. She just keeps going—getting movie deals, winning awards, and taking names. Her books boast the Newbery Medal (twice!, and also an honor and finalist), and a #1 New York Times Bestseller as well as a New York Times Bestseller. Plus, you’d recognize the titles of her beloved books (and the movies). They are:

which is the title that I am reviewing today. It is one of the Newbery Award winners, though I feel like it gets less attention than a few of the others. I have an uneasy feeling about the DiCamillo library. Every back cover reads like a book I am dying to read, and yet I have this nagging sense that I have indeed read two of three books in the past, and they have left so small of an impression on my mind. I am a little uneasy. But I am going to pretend like this is the beginning for me and I’ll review this book just for itself. 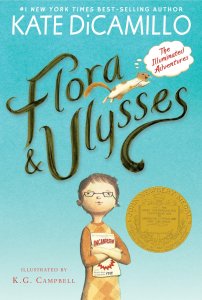 I actually read this with my son, but by the time I got around to reviewing it I couldn’t remember enough about it to do the review. (See!? I don’t know what it is…) So I re-read it, a feat that I don’t often perform, but which was made simple by the fact that it is elementary or middle grades level novel and I zoomed through it in my quarantine spare time in two days. It was a welcome pause in the middle of Moll Flanders and its Victorian wordiness.

What are the negatives of this book? There are maybe three. First, it is so quirky that at times it’s an eye-roller, like it’s trying so hard to sustain quirk in everything. Second—and this is a common one, I find—the ages of the characters are off. I do not find it in the least believable that Flora and Henry Spiver are ten and eleven. At the least, I’m going with eighth grade, and even then a little precocious. For one, they are so tuned in to things, they are super smart and verbose, and then there’s a little romance. Why do authors always feel the need to age-down characters? Unknown. (I have a sixth grader. I know a little what I’m talking about.) And third—another thing that I find very often in modern, elementary and middle grades writing—it. Is. So. Choppy. Why do modern children’s authors feel the need to keep everything so short? The sentences, some, but especially the paragraphs and the chapters. I’m honestly never one for paying a lot of attention to chapter titles, but when they come every couple pages, I’m even worse. And with this book, I felt distracted by all the pauses and the blocky-ness.

That aside, I’m going to give this book two thumbs up. It is exactly the story I would find interesting: middle grades magic realism with plenty of quirk and a gigantic vocabulary. It also has sweet and sophisticated ideas that are great for kids to hear. The message is basically that your parents love you, as imperfect as they are. Or, more basically, you are loved and you can have hope. Even though, as an adult reader, you are well aware that Flora and William Spiver will grow up to the be those high school and college kids, you just have to cheer for them, and of course for Ulysses, the squirrel. Eventually, you root for absolutely everyone.

The writing, and the occasional comic-like cartoons, are clever and well-done. Even though it’s a quick read, there are quotables (see below). It’s funny. It’s sad. It’s chock-full of memorable scenes and the action—though domestic—never really ceases. In fact, the language usage is one of the best things about it: DiCamillo spends a lot of time, through the mind of Flora, playing with words. They float around over people’s heads, they roll around on Flora’s tongue, the poetry-loving neighbor, novelist mother, and philosophy doctor each have their own ways of making word and thought a sort of high-stakes game.

If you have any kids in your life who would like a quirky, easy, fun story like this (or maybe they’re kids of divorce—that’s in there too, a common theme of DiCamillo’s), then I would recommend this. Especially if they tend to be on the more cerebral side (just because they’ll identify with the characters more). My son, who is mostly into nature adventure and fantasy, wasn’t a fan. But I am. And I am among many.

“Flora didn’t bother pointing out to him that the world was a treacherous place when you could see” (p58).

“You must also list among his powers the ability to understand. This is no small thing, to understand” (p121).

“This is how it is for me. What do I lose if I choose to believe? Nothing! …. There is much more beauty in the world if I believe such a thing is possible” (p130).

“So we said good-bye to each other the best way we could. We said: I promise to always turn back toward you” (p135).

“’I don’t know if that’s exactly what she meant,’ said William Spiver. ‘I think she was surprised. And perhaps her feelings were hurt. She certainly didn’t express herself very well’” (p157).

“’I think your mother had forgotten how to say what she means,’ said her father” (p172).

“It was dangerous to allow yourself to believe that what you said directly influenced the universe” (p199).