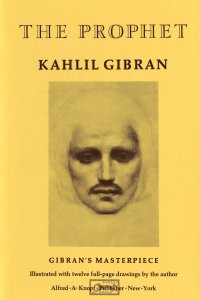 This is one of those books that has sat in the back of my head and at the bottom of my list of books-to-read for many years. It felt like if I took literature seriously and was a truly modern, truly literate person, then I would have to read this one some time. In fact, I should have read it already.

I saw how slim it was. I slid it in my “carry-on” bag for a bus trip down to Orlando and back, along with a couple other books, including the behemoth Little, Big and another shorty, The Five People You Meet in Heaven. The shorter books called to me first (don’t they always?) and I read both of them on the way down. Neither were at all what I expected.

The Prophet, by Khalil Gibran, is not a novel, nor is it a novella. Perhaps you already knew that. It was published in 1923. It has never been out of print, and is one of the most widely translated books in the world (though it was written in English by the Lebanese-American Gibran). It might help to know, before reading, that the book consists of prose-poetry vignettes, sometimes labeled “fables.” It also might help to know that it feels more like quotes and advice: like someone famous’s compiled sayings. Which is sort of what it is, though in a lightly drawn structure of story: a man leaving town for exile and townspeople asking him advice before it’s too late.

Because it is a sort of Muslim-Baha’i amalgam, I don’t relate to it as well as it appears others have. This is a treasured book, after all, filled with what many have labeled wisdom. For me, it had its moments, but it also didn’t feel especially new or special. Shock and awe. I truly apologize to those who reverence this book, but I just don’t need it: I have other wisdom literature to turn to.

As a piece of literature, it is mildly entertaining, but like I said, it reads more like a book of quotes than it does a story. Don’t look here for twist and turns or well-drawn characters. Turn here if you have to read it for a college course. Or you are short on good advice, in your life.

The Prophet will remain famous, likely well after this blog has come and gone, by being quotable and dealing with life’s big moments. Want something to read at your wedding but don’t want to pick the religious standard? The Prophet will do for you. (There were inspirations of Hinduism, Islam, Christianity, and Baha’i in Khalil Gibran’s life. Look up his life story if that interests you.) Or at your vow renewal service? The Prophet is readable and short, but it’s not for everyone.

(There was an animated movie, Khalil Gibran’s The Prophet, that came out in 2014, that I wouldn’t mind trying out. To make it a mainstream movie, they had to add a lot more story to it, and the animation looks beautiful.)

One thought on “Book Review: The Prophet”