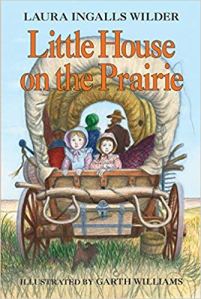 I’m sure I must have read Little House on the Prairie when I was a kid. And maybe Little House in the Big Woods. I don’t recall, though I do see the old copy on my bookshelf. What I do recall is being part of a generation during whose childhood the popular television series (with Michael Landon) aired. It remains part of the shared consciousness of Gen X and when you search “Little House on the Prairie,” it is what immediately comes up. This is a mistake. For one, the television series has not really stood the test of time. For two, the books, as often is that case, are better. And the books have stood the test of time.

The Little House series is an autobiographical collection, by Laura Ingalls Wilder, of eight books that tell the story of a girl growing up during the western expansion of the pioneers. There is a larger series written by other authors, broken up into books about different members of the Ingalls family, which means that they also break down into different periods of American history. (There are also books written by other authors which cover the years of Wilder’s life which she does not write about.) I can not speak to any of these other authors’ books. I will write here about the original eight.

They are, in order:

Seriously, they are great books. They are perhaps not the best writing in the world (literarily speaking, there are no word-acrobatics), but they are full of adventure and history, including so many informational bits that you finish up thinking you might do okay if someone dropped you in the middle of the prairie with nothing but a horse, gun, and ax. Of course, you also leave feeling like those pioneer people were tough as nails and crazy as bat poop. They really had adventure running in their blood, to be compelled to wander into already inhabited territory (though the government was slowly seeing to that) with no safety net. They had to deal with everything on their own. Robbery. Fire. Bad crops. Disease. Construction. Putting meals on the table. Keeping themselves warm. You see the tension in the characters of Pa and Laura (the main character) most. There’s a pull of the wild, almost irresistible, but also the acknowledgement that a good neighbor is priceless.

About the adventures: their life just isn’t dull (despite what you might think about being alone with your nuclear family for year after year). There’s just too much to deal with. And with each book covering around a year or so, there’s plenty of nail-biting excitement for a prairie dweller. Plagues of insects. Railroad worker riots. Prairie fire. Flooding. The list never ends. And if your parents told you they walked miles uphill, barefoot, in the snow to get to school, they were probably referencing Little House. About the historical details: I imagine that some readers would find it a bit much, but I have also found other people along the way who rave about that exact thing. Kids, especially, seem interested in the minutiae of building a log cabin, milking a cow, creating a latch string, making maple candy, etc. And definitely when I write that cookbook one day full of literary recipes, I’ll turn right here to the description of pioneer food.

Of course, as with almost any older books I read, you have the issue of political correctness. Modern American readers have a very specific (and up-to-the-minute) idea of political correctness that they tend to impose on other people of other cultures and times. Native peoples got the shaft in early America. This is history. In the Little House series, the interaction with the native peoples is a matter of fact. Each character deals with it in their own way, but the overall attitude is one of acceptance. We (and I) find this appalling, that the pioneers were complicit with the extraction and near-genocide of an indigenous people. Most of them didn’t see it this way. Even the simple idea of “us” and “them” can rub someone from a global culture the wrong way. Some of the characters seem more empathetic to the Indians. Ma, in particular, “doesn’t like them.” At heart, she fears them, and not for no reason. While this is disappointing to me as a reader, the book wouldn’t be honest without it. Personally, I take most differences in literary opinion as an opportunity to think about and discuss things, and when I read to my children, all the more so. There is no anti-Native propaganda here, and you can almost hear the gears in Laura’s head turning as she encounters dealings with the Native Americans. (This is a great boon of our main character in fact: those gears are always turning.) Even more glaring is the scene in Little Town on the Prairie when some of the townspeople (including Pa) put on a show wearing blackface. Again, it’s important to take this in its historical context, but it’s also a great time to discuss the history of the treatment of black people in our country and what is wrong with something like blackface.

I do love these books. They don’t diminish in quality. They simply represent different experiences with the West through a time. They’re not the poster child for fancy writing, traditional plot, or even for character development, but they are interesting, engaging, and real. Laura is spunky, thoughtful, and energetic. I wouldn’t want my kids to miss out on this rite of passage/cross-discipline series (nor would I want to miss the opportunity to say over and over again, “You think I’m strict?”

Note: There is a pretty sudden jump (for one book) to a boy in upstate New York, near the beginning of the series. You can skip this book if you want, though it is an interesting look at someone in different circumstances during the same time period. The explanation is this: this boy would become Laura’s husband, and the placement is meant to be chronological.