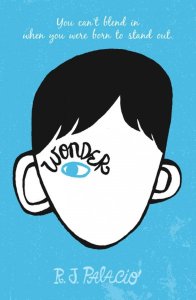 Wonder by R.J. Palacio is my daughter’s favorite book (and she is not alone). I’ve been meaning to read it for at least a year, and I have even already watched the movie (because my daughter wasn’t going to wait around for me).

Having barely set the book down over the past two days, I zipped through it. It’s a page-turner, for sure. And it is really good. I cried at least four times, though my daughter looked at me with raised eyebrows and I admitted that I cry more the older I get. I was also crying my way through Anne of Green Gables for like the twentieth time, last week.

If you aren’t already aware, Wonder is the story of Auggie Pullman, a kid-tween who is making the transition from homeschool to private middle school. His situation, however, is far more complicated than the usual new-kid-in-school’s, since Auggie was born with a clash of genetic disorders that leaves him looking anything but like all the other kids in school. He’s also spent a lifetime in and out of hospitals. No surprise, then, that the book (and movie) supply great talking points for kids and middle schoolers about bullying, appearances, kindness, judging, etc., and the set-up is great fodder for an exploration on family, relationships, and friendship.

What can be said about the book itself: the writing in the book is interesting and engaging, with some literary surprises. The characters couldn’t be more endearing, even while they are rather fleshed out and relatable. The plot is interesting enough, too, and there are moments of nail-biting where you just can’t put the book down and go to sleep. Being middle-grades and pretty new, the story does have a very modern voice, so if you are older you might be annoyed by the softness of it and the interdependence of the characters, stuff like that. But the characters are more than just modern. The family especially—but also the friendships—have a real breath of old-fashioned to them. These people struggle, love, fight, respect, work, laugh, and their friendships are deep, meaningful, and loyal, their family ties affectionate, traditional, and overall positive and strong. (It’s difficult to find books, movies, and shows these days with the family portrayed positively and even “normal.”)

My only critique about this book is the ending (okay, and maybe using a different typing style for only one character, having such short chapters, and giving physical descrptions sometimes long after we’ve been with a character). And I wouldn’t say I don’t like the ending, just that it is a little trite. It ends realistically enough, I just think perhaps it should have ended a little earlier in the story. Before the been-done bow was sitting on top of the package. I don’t want to give too much away, but we end up at a scene that is just too neat and too recognizable, for my taste anyway. I will admit that there are plenty of readers who ask for this type of ending. And endings really are the most difficult part of writing. (And you can’t please everyone.) There are, in effect, a series of endings, which I think could have been abbreviated.

I would enthusiastically recommend this book to everyone. Especially middle graders, but really just anyone. Even the adult characters are sketched out enough that no one (except mean people) would find themselves lost here, or unable to relate to someone or something.

The movie is nice. My daughter lamented that some of her favorite characters and scenes were cut out, but I actually saw the movie first, so I can’t say if I would have felt the same. It’s a pretty solid family film, as long as everyone’s ready to deal with the material (like bullying and living with a deformity, etc.). I very much appreciate seeing a movie where not only are the parents fully functional and together, but they are also influential—even powerful—in the child’s life. I would recommend it, easily, though I’m not sure I would freak out about it. (I also kept Julia Roberts as the mom in my mind when I read the book, despite the (late) description being different. She just feels to calming to me.)

I would recommend giving it a little time before moving from book one to book two. I mean, this is a story, and Julian is the villain. We are in a culture that enjoys exploring the villain and humanizing him, and there is some legitimacy to that, but we are also human and we identify with light and dark, good and bad, hero and villain. So it’s a leap.

In the end, I liked Wonder better than Auggie & Me, and I thought Auggie got less engaging as you went. (FYI: the book is really three short stories or novellas bound together. They all tie to the original story from Wonder, but are also their own stories.) I really think Palacio should have made these stories about someone outside of the Wonder universe. I felt it would have been stronger to say what she wanted to say about new characters, instead of beating the old plot into the ground. For one, the stories change our experience with Wonder, but we don’t need that. Also, I don’t find the expansion helpful or pleasant. Meanwhile, the stories have some interest in and of themselves. (Note: Written as they are, though, one might have a hard time understanding them without reading Wonder first.)

This is one of those I wouldn’t discourage you from reading. Julian’s story, in particular, might be engaging to kids and teens and the other stories have some real interesting twists. But it’s not a straight-up recommendation. I think Wonder works better standing alone.