My fifth-grade son has finally started reading novels on his own, and I am very happy to announce that his first, second, third, fourth, and fifth novels are by Roald Dahl. If you didn’t catch it already on the blog somewhere, I am a huge Roald Dahl fan, and so I of course would prefer him reading that than, say, The Magic Treehouse. I was hoping the humor, grit, and childishness would capture him, and it did. Sometimes he even reads more than what I assign him for the day, and I also sometimes catch him chuckling to himself. (Do ten-year-olds chuckle? Perhaps he’s giggling.)

To accomplish this, I curated a small stack of Dahl books which were visibly short, with illustrations. These struck my son as way less daunting than the classics and/or fantasy books we usually read together. Dahl’s books often are short and, well, not sweet—rather rowdy and irreverent—but these are some of his shortest, some of them not even technically novellas. 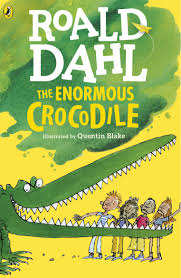 The Enormous Crocodile. This book is probably more of a short story than a novella, so it was really a great place to start for my reluctant reader. The illustrations in our copy were in color and were more abundant than the chapter books, though still those classic, crude drawings by Quentin Blake (the original illustrator of most of Dahl’s works, which are often identified with Dahl). My son does sometimes complain about the skill level apparent in the illustrations, but I think they’re more of an acquired taste. Either that, or you just accept them and read past them. The Enormous Crocodile is about a crocodile who leaves the river to trick some children into being eaten. He boasts of his clever plans all through the jungle, and the other creatures don’t share his taste for either children or trickery, so they do what they can to thwart his plans. My son’s favorite line of the story is the last. You’ll have to read it to find out what that is. 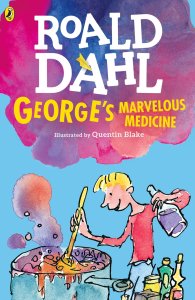 George’s Marvelous Medicine. This is another short one, but has chapters and (black and white) less illustrations. In this story, George goes to stay with his grandmother, who is a crazy, devious, old lady. To get back at her, little George mixes a number of things from the house pantry, medicine cabinet, and closet to make a “medicine.” He gives it to her and then to a number of different creatures, resulting in some rather magical results. With a new friend, he embarks on a plan to manufacture and market the stuff. It’s more of the Roald Dahl absurd fun (and sometimes rudeness and crassness) and I recommend it with this caveat: please remind your children that mixing together random chemicals is very dangerous. If they are intrigued, make them a “potion bar” with edible ingredients and let them play.

The Twits. Of what I had previously read of Roald Dahl, this was always my least favorite book, though it is one of his secondary most-popular. If you think some of Dahl’s other stuff is controversial or base, this book may take that cake. It is about a family of—well—twits, or unintelligent, unrefined people. They are mean and foul and they just get up to some stuff playing over-the-top pranks on each other and that’s about it. The ten-year-old laughed. Mom was properly appalled.

Charlie and the Chocolate Factory. Now, there’s no doubt that you know this story, probably from either the Gene Wilder or Tim Burton (or both) movie. Both of those movies pretty closely follow the book in both plot and tone. Charlie is poor. His four grandparents share one bed. He wins the coveted golden ticket.

Grandpa Joe gets miraculously from the bed and takes Charlie on his exclusive tour of Willy Wonka’s Chocolate Factory. Oompa Loompas, bad-egg children, and antics ensue in room after room and misadventure after misadventure. You probably know the ending, too, but if you have a child who doesn’t, yet, this would be a great read and then family movie night.

James and the Giant Peach. This one also has a decent (stop-motion) movie to watch after reading, but it’s not as classic as the Charlie movies. The book, on the other hand, is probably more popular.

It’s Dahl standard, with its small child who encounters a baffling world and terrible characters and overcomes through endurance and innocence. Little James, in this instance, takes a trans-Atlantic trip in a giant peach (you read it right), along with a handful of colorful, non-human characters. Laughter. Magic. Inappropriateness. Juvenility. And, above all, a real sense of meeting kids where they are in their own head-space.

I recommend them all, which is not a surprise. I had not read the shortest ones before now, but they’re just as Dahlesque and oddly endearing as the rest of his cannon.

To find out more about Roald Dahl, see my review of Boy, his autobiography, HERE.