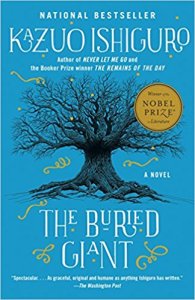 I hate to be redundant, but once again I find myself having just finished a book, mourning its potential. The Buried Giant by Kazuo Ishiguro—which won a Nobel Prize and is a national bestseller—is not bad, exactly, but it’s also not so good. But there’s a little more to say, here. (I’m about to say “despite” a lot.) Despite its cleaness, it felt unengaging and unemotional. Despite its reputation, it’s flat and flagging. Despite its being Arthurian (I am a fan), it was groggy in some of the wrong ways.

Because it’s supposed to be a little groggy, right? We’re witnessing a fog of forgetfulness. And in some way we feel this forgetfulness, as readers. But I found that since this aspect wasn’t all in, it felt undone, half-hearted, or like Ishiguro couldn’t quite figure out how to handle it. I would have preferred that it was overdone so that it was more of an experimental novel. The novel had enough of this and of other things to make me want to like it, but in the end, I never got there.

We pick up in what feels like a historical science fiction Hobbit-town, where a couple is aging, thanks to their neighbors, ungracefully. Amidst their secret suspicions that there is a curse of forgetfulness on the land, they decide to seek out their son, who they can hardly remember. (There’s a lot to go with here, from the modern twist on Arthurian England to the added tension caused by the forgetfulness: so many questions!) Thus they set off, encounter a couple of characters that give us foreshadowing and a couple that become their travel companions. It’s hard to know who we can trust, and if we are really rooting for the return of memory to a deeply divided, war-torn land. And will Axl and Beatrice make it to their son? Heck, will they survive the journey at all?

Disjointed. Incomplete. I could guess enough about where we were headed for the story not to carry enough suspense. And the rest of the storytelling lacked any tension in the narrative arch. Wandering. That’s what I felt like; I was wandering. And this story, literally, is a journey, so more standard journey direction and tension, please.

Whatever. Wanted to like it. Was disappointed. And I’m not the first person to say it. Perhaps I should read some other Ishiguro., like Never Let Me Go, or The Remains of the Day.