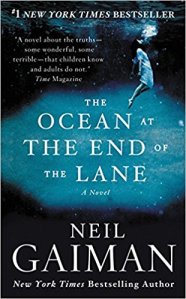 It is hard to walk away from a book and expect to just re-approach it later and talk about it. Things have changed, they always have. And my memory never was what it used to be. I have the blog for that. In fact, after a couple years of always writing slightly behind myself (except on odd occasions), I am almost caught up to myself. Case in point: I read The Ocean at the End of the Lane one month ago. Just give me another month and I’ll be reviewing in real time, again. In fact in fact, Neil Gaiman’s American Gods is one of the last books I have left in my backlog.

Shift gears. Neil Gaiman was this name that I just kept hearing everywhere. Trying to be a bibliophile or even just a nerd in general and not come across his name has become impossible. “Ooh, they’re making a miniseries based on a Neil Gaiman novel,” “Let’s go to comiCon and see Neil Gaiman,” and then his name on the bookshelves, on the reading lists, on library posters… Nothing against the guy, I just hadn’t gotten around to him yet (except for the little blip where he crossed paths with Tim Burton) and was feeling really in the dark.

Neil Gaiman (that’s his given name) is a writer: of novels, short fiction, comic books, graphic novels, film, and even audio plays. He has won the Hugo, Nebula, Bram Stoker, Newbery, and Carnegie, among other things. He was written several very popular books, including The Sandman (graphic novel series), Stardust, American Gods, Coraline, The Graveyard Book, and The Ocean at the End of the Lane. Other books include Good Omens, Neverwhere, Anansi Boys, Interworld, The Silver Dream, Eternity’s Wheel, and Cinnamon. In other words, you could get going on Gaiman and it would take you awhile to exhaust all of his “stuff.”

I can’t see that happening with me, but I do find his work, uh, interesting. Let’s just keep moving.

Now I have to mention Coraline, because I’ve seen this movie lots of times and so it was always going to change the way that I approached The Ocean at the End of the Lane. Coraline was a novella written by Gaiman that was co-written and produced for screen by Tim Burton, in the style of The Nightmare Before Christmas. I see everything that comes out related to Tim Burton, pretty much. So I’d seen Coraline, and I’d brought home a copy, and I’d shown it probably prematurely to my children. (It does work okay for some kids, but the novella is technically in the horror genre.) When I picked up The Ocean at the End of the Lane, I was in a totally rad used bookstore in Pinehurst, NC and wanted to snag something for my husband. A month later, I fished it off his bedstand in those weak moments after having just finished another book. When I began reading Ocean, Coraline was all over it, like hot, sticky breath. Now mind you, I haven’t read the book, but I can’t imagine it can be that far off because Ocean is a type of spiritual sister (as Jumanji and Zathura are called) to the movie, anyways. I couldn’t seem to get rid of it. The place I was in felt so much like the dream-like-scape of Coraline. Feelings were the same. And, of course, there’s a child in a precarious and obliquely terrifying situation, and a super scary, spider-like adult female blocking his or her way from seeking that help. The kid’s spunky enough and relatively brave. And there you have it. I could see through this whole story from the beginning, simply because I had seen it before.

Also, why the story-within-the-story? Since this device has been, in the past, overused, I think an author needs to justify its usage. I didn’t really get it here. Except maybe that he keeps forgetting? Nah.

Also, Gaiman offs the scariest protagonist way too early in the story, as well as introduces a less-scary protagonist too late. Both of these moments create a real bumpiness in the narrative that might just cause some people to set the small book down and never come back. If the main characters were more compelling, perhaps? It was not the characters who stuck with me at all when I left this story. It was just a couple of glaringly creepy moments, which I suppose all horror creators have to make happen. (Though the age-appropriateness of that one scene makes me wonder how on earth the cover told me that it was “family” reading. What? It’s not.)

All in all, I found The Ocean at the End of the Lane to be disjointed and re-told. The only other book I’ve read of Gaiman’s, to date, was American Gods, and though it was not exactly my speed, it was original and engaging. I wanted Ocean to be better, and saw where it might have been. But did I really need it to be anything, at all? I’m pretty sure I could just go to the bookstore and get Coraline, which I think I just might.

I’m not saying it’s bad, exactly, just that I was underwhelmed and could have done without it. In the end, I will be returning to Gaiman to read and see more: Coraline, Sandman, Stardust, and The Graveyard Book, at least. And you can look for the American Gods review coming soon. I’m pretty sure you’ll find it more fulfilling, as a review and as a book.