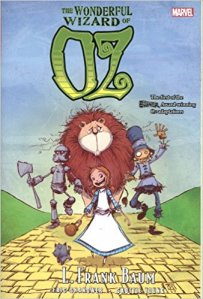 In our home school (officially Avonlea-Potter Academy), we have a library day for history, about once per week. This week, my son had little to no interest in scanning the books about the Byzantine Empire and we ended up in the graphic novel section. I have been wanting, for years, to read more graphic novels, but I’ve really read only a handful (partly due to their price and the speed of the read.) I figured it would be a good opportunity–during my “Book a Day” series–to pull a few graphic novels into the fold. And I was feeling like I could handle library books–in other words, not purchasing them–this week.

Here’s something I know about me and illustrations: I don’t like scratchy ones. By “scratchy,” I mean the kind that use several lines to create one line, almost like a sketch. They feel messy to me, and almost always carry a darkness. Plus, with ADHD, it’s already hard for me to follow a graphic novel on the page, and the scratchy illustrations add visual noise that I can’t really afford. It confuses my eyes.

Obviously, I say this because the style of the illustrator–Skottie Young–is “scratchy.” It’s not the scratchiest I’ve seen, but I still found myself at odds with the illustrations, wanting them to be much cleaner. Otherwise, the illustrations are fanciful and I thought the colorization worked, although I think the style of coloring also contributed to the busy-ness on the page.

I found myself a little bored with this story because, let’s face it, I’ve heard it too many times before. I wasn’t waiting around to find out if Dorothy would make it back to Kansas, so that might have taken away from the story-telling. On the other hand, there were some twists and turns that don’t follow the movie. (They may follow the book–I haven’t read it yet.) So that added some interest. The narration was sometimes choppy. Occasionally I lost the flow of the word balloons. But I really enjoyed the sweet, new and improved (and younger) Dorothy, since some of the characters from the old movie get a little lost in time-translation.

Didn’t like the blank eyes or ugly characters, but did enjoy some things. It won’t waste your time, but I wouldn’t rush out to get it, either.

There are more books in the graphic novel series by Eric Shanower: The Marvelous Land of Oz, The Emerald City of Oz, Road to Oz, Ozma of Oz, and Dorothy & the Wizard of Oz.