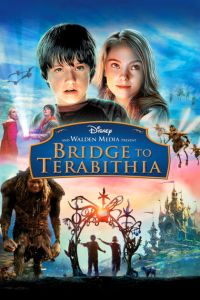 When I saw this movie with my kids, a few years ago, I was really expecting something like The Spiderwick Chronicles or The Chronicles of Narnia. Perhaps the absence of “Chronicles” in the title should have been a sign, but this book (and movie) are nothing like either of those books/series. Terabithia–despite its fanciful name–is not even fantasy. I left the movie feeling oh so very sad.

Left the book, the other night, feeling the same way. Why is this otherwise delightful book so extremely depressing!?!

I think that if the pacing were something different, and the foreshadowing a little heavier, this book would sit better with me. But because the pacing is very fast and the darkness in the book up until the end is largely of the poverty and bad parenting and bullying type, you really don’t see the grave ending coming. Especially since it happens in contrast–on purpose–to “The Perfect Day,” leaving both you and the character it involves unmoored and reeling.

In some ways, I feel that this book captures the side-swipe that tragedy usually carries in a way most books don’t. And the trauma justifies why this story would have been retained and told (like from the character’s standpoint). And there has to be book for children dealing with loss, right? I experienced childhood trauma, and found a “friend” in the movie My Girl.

But this book is so tragic! The reader ends up desperate to see it end any way but the way it did. But enough about that.

Despite the precipitous emotional drop you will experience at the end, you should read this book. It is nice. Delightful even. The setting is beautiful, the characters well-drawn and engaging, and the story, enough. It is mostly a character story, and you find yourself really loving and rooting for these people, even the ones who are broken and dysfunctional. You’ll have to wait until your kids are old enough to handle literary scars before reading it aloud, but the read is worth it, as its Newbury Medal proclaims from the cover.

My only real problem with it is the pacing. I appreciate that it is short, but there are areas of tension and build-up that should have been stretched much taughter. Occasionally, the reader experiences plot whiplash.

“…his feelings bubbled inside him like a stew on the back of a stove–some sad for her in her lonesomeness, but chunks of happiness, too” (p76).

“Sometimes it seemed to him that his life was as delicate as a dandelion. One little puff from any direction, and it was blown to bits” (p77).

“Lord, it would be better to be born without an arm than to go through life with no guts” (p93).

“She had made him leave his old self behind and come into her world, and then before he was really at home in it but too late to go back, she had left him stranded there–like an astronaut wandering about on the moon” (p114).