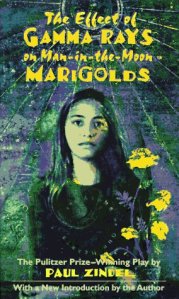 This book–which is really a play–could write the book on 1970s theater. After all, it won the Pulitzer. But more than that, it just reeks of 1970s theater coolness, and I do mean that “in a good way.” If you enjoy reading plays, especially plays from around that time period, you–well, you’ve probably already read it, but–must read this right now.

When I read this as a highschooler, I think it struck me as too depressing. (I was also made to read The Pigman, also by Paul Zindel, but I did not like that.) I suppose it is depressing, a bit, but that’s not predominantly how I read it now. I was surprised at how much I enjoyed it, from the writing to the characters to the story (almost anti-story) that unfolds. I also loved the imagery and symbolism, which you can’t help but notice even though it’s done subtly: we’re not talking about gamma rays here; we’re talking about something else toxic that’s radiating.

It is, as all good 1970s literature is, about messed up relationships and bad parenting. But it also has a certain amount of sympathy, even for the mother. You want to hate her, but you see yourself in her. Well, at least I do, because I’m not a perfect mother, or person, because it wouldn’t have to be a mother, here. Not exactly.

I was glad I was able to read this one, in a day. I think you should, too.