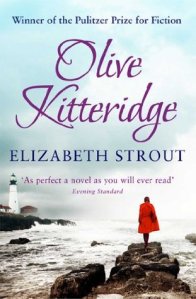 Is it a novel? Is it a book of short stories? Personally, I have it filed on my bookshelves in the short stories section, but you could really go either way with this Pulitzer Prize-winning book by Elizabeth Strout.

I came across this book several years ago, when it won the Pulitzer and landed on reading lists for book clubs around every corner that I turned. I especially remember one friend recommending it to me, so I picked up a copy. I read through the first few chapters (or stories), and—since I had no standing commitment back then to finishing books—I let it disappear. A year ago we moved into a new house and a few months later were able to put up a number of book shelves and finally display our complete library. For months afterward, the yellow spine of Olive Kitteredge caught my attention, facing my usual spot on the couch. Had I ever finished that book? Couldn’t remember. But it certainly wouldn’t cost me anything but time to read and review it now.

Olive Kitteridge is, really, a book of short stories, but when pieced together give the reader a much wider view of the town of Crosby, Maine and of the common character (no matter how obscure in some stories) of Olive Kitteridge, at different points in her life and from varying angles. The beauty of the story is in this set-up, because we get to see just how many opinions go toward revealing the truth about any one individual and likewise, how a community has its many stories to tell the truth about it. Paired with its lyrical, sometimes witty, writing, it is a fair candidate for the prizes that it took home, I think.

Elizabeth Strout, according to her bios, has always been a writer. She is from the area Kitteridge covers and is a nature-lover, which shows in her writing. Her first novel was published at age 26, and her genre is considered literary fiction. (She also writes for magazines and has an inexplicable degree in law.) She has this sort of dreamy, writer-envy-inducing life (at least when looked at as bare bones), with a pair of professors for parents (one an English professor) and lots of time in the wilds of Maine and New Hampshire. She started sending out stories at age 16, spent some time at Oxford University, and waitressed before publishing her first book, Amy and Isabelle to critical acclaim. The fairy tale continues from there, and by her third book, her stuff was selling in the millions and she had landed some of the big awards in fiction. Her other books are Abide with Me, The Burgess Boys, My Name is Lucy Barton, and Anything Is Possible. 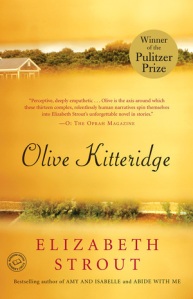 How would I describe Olive Kitteridge? Sometimes pretentious. Sometimes slow and depressing, it definitely has its points of interest. By the end, I really did become engrossed in the character of Olive, but it was hard work to get there. Rewarding, but hard because I could have been reading things much quicker to reward. Did I love the book? Not really. Olive will stick with me, I think, but without a storyline to drive it, I don’t think I will return to the book again.

There are upsides, though, to reading realistic fiction like this, which portrays people as universally faulty and often mistaken. But does this book have a shred of hope? I don’t really know. There is no conventional plot, since it is a book of short stories, but many of the individual stories end—not so much with loose ends as—on a sour or deeply sad note. There were some stories that I appreciated more than others, including the long and winding revelation of Olive herself. I can relate to her, as someone who recognizes my own unwanted and unexpected tyranny in motherhood. But I love a book infused with hope, which I believe is the ultimate reality.

I think my favorite part of this read is the stark and sometimes painful portrayal of old age. Aging doesn’t show up in just any ol’ book, and this one is very honest, at least about the trials of aging and at various phases in the aging process. There’s a breadth of issues here that would be hard to find elsewhere, and the issues are stripped of any shenanigans. Clean, but perhaps a little bleak.

Overall, I would recommend it for a limited audience, and without the expectation of a beach read. If you are into short stories, literary literature, or bleak books, this is for you. Also, it would be excellent for a book club that focuses on books about aging. Otherwise, you might find its speed and route to be a little too slow and meandering for you.

I read Olive Kitteridge in paperback, published in 2008 by Random House.

When I looked up the cover of the book, I was pleasantly surprised to find that there was an HBO miniseries that aired in the past few years. It is Emmy-award winning and starring people who strike me as perfect matches for the characters in my head. Unfortunately, the battle for affordable movies continues in this country, and I had to enroll in a seven-day free HBO trial to avoid paying $15-$20 to watch a four-episode TV show. Sigh.

Despite that Olive looks more like a swarthy Julia Childs in my head, Frances McDormand did a superb job as Olive. Honestly, the casting was amazing, and the miniseries certainly deserved an Emmy for its cinematography, directing, acting, writing… you name it. Thankfully, as well, the writers really seemed to have a sympathy and understanding for the book, which is SO, SO hard to find. There is only one obnoxious scene (showed twice) which was made up and didn’t jive with what I understood about Olive.

Other than that, if you are going to read this book, definitely follow it up with the movie. It is more of the same (a little depressing, stark, slow, terrifying and beautiful) but has a shorter and more continuous format. My husband enjoyed it so much that he is now reading the book.