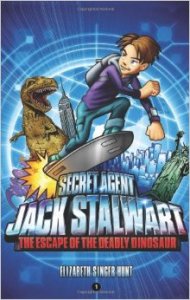 I will dare to give the Jack Stalwart series of children’s secret agent books three stars, but only because my eight-year-old son loves exactly two series of books, and this is one of them. If I had found these Elizabeth Singer Hunt books on my own, I would have only made it through the first few pages.

But who can argue with getting my totally uninterested son to read?

I mean, I can say nothing more for the writing and plot and details except that it is mediocre. There is little to no depth. And, quite frankly, there are a number of inconsistencies (in any given scene, even. One of my reading pet peeves are action scenes that–if you tried to act them out–don’t work. These books are full of those). Plus, I find the bizarre unexplained fusion of magic and science to be appalling. (Jack reaches for his super high-tech back pack and his wall map lights up to tell him his next secret destination… as Whizzy the talking globe whirls to life and chats with him. Is Jack a junior James Bond or Dora the Explorer?)

On the plus side, the books are consistent one with the other and the cover art is eye-catching and well-executed. 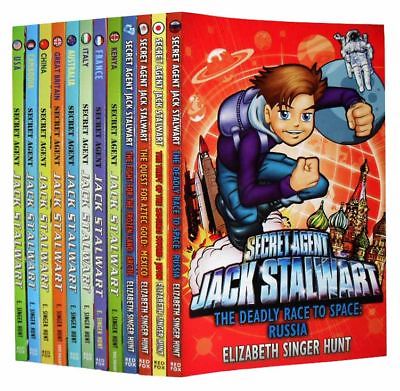 Concept: In this British series (which can be hard to find in the US except on Amazon), Jack’s brother Max has disappeared while working for a secret kid agency. Jack joins up to find his missing brother and becomes a Spy Kid (under a different brand), complete with tons of gadgetry and exotic destinations (which are supposed to teach your kid some geography and often something else, like art or history). My son always skips the bits at the front of the book, which are meant to educate (and, I suppose, to make the reader feel like a secret agent, too). He just wants a dinosaur to run through a city.

There are fourteen books in the series:

In the end, I am happy to have my son reading, but I would not have chosen this series for him. The imagination and action are sorta there, but the execution not so brilliant. For a similar, but more literary series, I would steer you toward Ruby Redfort, by Lauren Child, but I suppose that reading level is a little higher.

Currently reading How Nonviolence Protects the State, by Peter Gelderloos and My Bright Abyss, by Christopher Wiman. Also, taking a detour for October-December for some holidays-related reading.

With my son, I'm reading Walk Two Moons by Sharon Creech and reading ahead of him: Lyddie by Katherine Peterson.

The next books to review are Little, Big by John Crowley and Frankenstein by Mary Shelley.