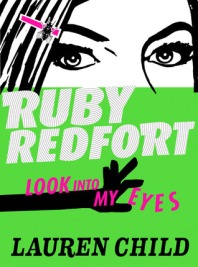 The Ruby Redfort series by Lauren Child, 2011-2014. I read the first two of six total books. The first four are titled Look Into My Eyes, Take Your Last Breath, Catch Your Death, and Feel the Fear. The other two titles are not yet released, but will be in the next couple years.

The reason I only read the first two is that the third and fourth are only available in hardcover until this summer and I simply didn’t want to pay hardcover price, even though it was very tempting. I don’t really like hardcover books as much as paperback, anyhow. So I wait. 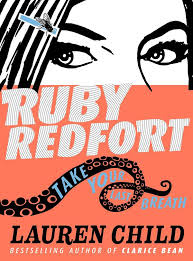 go into this with full disclosure: I already love Lauren Chlld. She is the brilliant writer and artist responsible for the marvelous Charlie and Lola series, as well as Clarice Bean (see review HERE) and a ton of other superb art, including lovely covers for two of my favorite books, Anne of Green Gables and Pippi Longstocking. So I fully expected to love these books. (And who wouldn’t? Just look at the rad covers.) More on all this to come; I just wanted to let you know where I stood.

There are some things about these books.

The thing is… my daughter doesn’t like them. She is a fan of fantasy and mystery and also very much of mixed-up fairy tales. Ruby Redfort falls into the secret agent mystery category. Although not a big fan of Clarice Bean, I thought Windsor would like these more because of the mystery. But she has set them aside, twice, to continue plowing through yet another mixed-up fairy tale series (even though I found the other series inferior…) and has yet to finish even the first one.

The thing is… I love Lauren Child. Love her. I know I already said that, but there is something (or many somethings) that I really like about her and her style and her voice. From her children’s book illustrations to the spunky attitude of all her characters, I have been caught by the whole shebang hook, line, and sinker. So perhaps its not for everyone, but it is for me. And it is for plenty of people. Especially Brits? Maybe. But Charlie and Lola hold their own here in the US.

The thing is... these are a British thing. Which needs to be further explored beyond my last comment. It’s not just about where Child is popular, it’s also about where her style resonates and where her plots and characters make sense. I am one of those typical ravenous-reader Anglophiles, so not only am I fairly comfortable with British stuff from all the English literature I have read over the years (and the history class I endured and the many, many movies and TV shows I have ingested), but I truly enjoy English culture. So I love all the pink milk and the butlers and the “toodle-oos.” But I did, as an American, find Ruby Redfort a little awkward in this respect. Whereas Child’s other works take place in England, Ruby Redfort takes place in the USA. I found myself wondering more than once if Child had regretted placing the super sleuth in the US during the writing of her Clarice Bean series. I just, as an American, found lots of times when a character would refer to an object by its very British term or would do things that are quite un-American. Redfort, true, is British, but everyone else is not.

The thing is… I really like them. I must think I’m ten again, because I can’t wait until the next two come out in paperback so I can read them immediately and I also can’t wait until I have them all lined up on the shelf and can read the code on the spines. The adult in me loves (as always with Child) the artistic choices (except perhaps the font on the main type, inside). The cover of the second book is perhaps my favorite cover on my whole entire bookshelf. (The display on a computer screen does not quite do it justice.) I think these books are fun and I just get more and more into the characters as we go along. There’s a real style here that I find fun and refreshing while at the same time being extremely retro-modern.

My critiques: Child violates one of my biggest novel pet peeves: she sometimes doesn’t tell us what people look like until it’s too late. I hate getting to book two and finding out John has blonde hair when I had been picturing black for 300 pages. She even makes this mistake with the main character! Also, as mentioned, the American/British thing gets fuzzy. And poor Clancy becomes vaguely unlikeable at times.