The Ender Quartet, by Orson Scott Card, which includes Ender’s Game, Speaker for the Dead, Xenocide, and Children of the Mind, and was published by Tor between 1985 and 1996. There are plenty of other series-related materials, which I did not read. I figured 1,668 pages was enough. In fact, 706 pages might have been enough.

If you are at all interested in reading the whole Verse in chronological order, check out the list here.

Now, if you think all Orson Scott Card writes is Ender, you would be wrong. He has ten other series, a miscellany of novels, many short stories, and is the compiler of various anthologies. Oh, plus he writes plays and nonfiction and collaborates on comics, video games, and screen. He is a novelist, critic, public speaker, essayist and columnist, best known for his science fiction, and specifically for Ender’s Game and Speaker for the Dead, which both won the Hugo Award and Nebula Award.

Card is an American author, born in the 50s, and a practicing Mormon and great-great-grandson of Brigham Young. He teaches at Southern Virginia University, and his passions include writing, teaching writing, and political, religious, and social commentary. He currently resides in Greensboro, North Carolina, an important location in his Enderverse.

His career as a writer started young with poetry and then theater writing. He then switched to the profession of editor and worked for the Church of Latter Day Saints. By 1977, he had published his first short story under a pseudonym. While writing mini-plays for LDS radio, he wrote and published the short story that was to become Ender’s Game, and when two more of his books received book deals, he left off editing for writing. Bouncing back and forth between writing and editing, Card received his Masters degree and was on his way to a PhD when the Alvin Maker Trilogy landed him another big book deal.  Shortly after, he published the first two Ender books, won science fiction’s top two awards, twice, and achieved sci-fi fame and fortune. He has used at least seven different pseudonyms over the years.

Here are my reviews of each of the books in the Ender Quartet:

Ender’s Game. I have read this book before, when the announcement that a movie was in the making caused various people in my circles to explode with excitement. I asked, “What is this book that means this much to people?” and I read it. And I enjoyed it. And when I saw the movie, I decided to re-read it, read the rest of the Quartet, and review it. To put it plainly, Ender’s Game is just a really well-done science fiction novel with great twists and turns. It can be a little on the heavy side, and I am not thoroughly convinced that the characters’ ages are right (and I am not alone in this opinion). I would highly recommend this book for anyone, even those who have not read a lot of science fiction (like, let’s be honest, me). It is full of Card’s characteristic exploration of morals and psychology, but is also chock-full of surprises and innovation.

Speaker for the Dead. I was really frustrated when I started this book and it was so completely different from Ender’s Game. I felt lost. But as I continued, it grew on me, and it’s a pretty incredible book on its own. It gets too slow and preachy at the end, but up until then it is intriguing and riveting. I also kept wondering what happened with one of the characters, but I guess it was resolved at the end. You also start to notice just how unrefined Card’s writing is by the time you get to more lengthy passages, but we’ll talk about this in a sec. Also recommend this book.

Xenocide. It is amazing to me that the writer for the first two books of the Quartet is still the writer for the third. I found myself wondering if his editors stopped editing or if he stopped listening to their advice. (Upon researching Card, I wondered if his astonishing output is the reason for quick editing and for a lack of refinement.) While full of his fascinating science fiction stuff and moral dilemmas galore, this book is not only HEAVY on religion, but also SLOW and even frequently boring. It’s super wordy, taking pages to do something that should be done in a paragraph, and there is lots and lots of telling-not-showing (especially about character feelings). Some of the old characters even go sour on us (right from page one). In the end, I found myself enjoying some of his characteristic twists, but thought that he should have just stuck with the characters on Path and left the Speaker characters in the background, like he did between the last two books. Not highly recommended, although if I were a big science fiction fan, I might be tempted to mine the Enderverse for more gems. 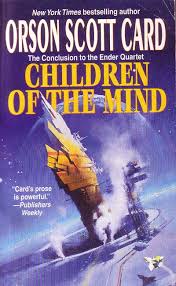 Children of the Mind. Sounding like a broken record here, but this one still has great twists and turns and some real quotables, and still I find I am getting sick of Card’s repetitive, long-winded, and flat prose. I am only hanging on for the next big shock. Also, does anyone else have issues with the negative-positive characters (like Novinha and the Queen), dropped characters, and bizarre pacing? Same feelings as for the last book. What got me through was the couple of romances, at the end. Thinking that the first two books are all that’s best about his Enderverse.

Overall, like I told my husband, there’s nothing about the language in the Ender Quartet that could take my breath away, the way I like good literary fiction. But there was also nothing to distract from the story (except maybe the long-winded thing). So no bad writing, either, except I would have advised him to cut, cut, cut (after the first book), without cutting his moments of sage-like insight. I’m not a big science fiction reader, and I really enjoyed this weird mix of science fiction/psychology/anthropology/academics/philosophy/religion. It’s something else.

I had just seen the movie before the reading. I thought they did a pretty good job with it. It was perhaps a little heavy and violent for my six-year-old, but otherwise, a real decent adaptation. And it was adapted, of course, changed here and there, but also remained quite true to the story. Decently casted. Decently acted. Decent effects. Etc. etc.

Currently reading How Nonviolence Protects the State, by Peter Gelderloos and My Bright Abyss, by Christopher Wiman.

With my son, I'm reading Walk Two Moons by Sharon Creech and reading ahead of him: Amal Unbound by Aisha Saeed and In the Reign of Terror by G.A. Henty.

The next books to review are Little, Big by John Crowley and Walk, Sit, Stand by Watchman Nee.