I have started in a writing group, this month. (See “It Could Have Been Worse.”) I have entered another contest. I have been rejected by the establishment as a self-publisher. (To be addressed in a future blog, titled “The Rejection of the Nuances.”) I have signed up for NaNoWriMo, National Novel Writing Month. (See the official website at NaNoWriMo.) And I have been stymied in my usual work on The Family Elephant’s Jewels by vacation, injury, and home renovation.

So here is the month of October (post-Orlando) in entertainment.

Phineas and Ferb (TV series, 2007-). I have to admit that I refused to watch this show for years because I couldn’t figure out why the main characters had heads shaped like a triangle, Frankenstein, and the letter “P.” I lumped it together with all those nonsense shows that dominate modern cartoons, which I believe contribute to this bizarre confusion our children have about reality. But then, somehow, I let my kids watch a few episodes and I discovered very quickly that not only is the show not like all those super-bizarro shows (I still don’t know why their heads are shaped like that), but it’s quite funny and clever, perfect for both kids and adults. It has become our favorite show to watch as a family. We like it so much, we have plans to be them for next Halloween.

Mansfield Park (movie, 1999). I had a night with just myself and Amazon Prime, so I surfed through the new additions and found this. I usually enjoy a Jane Austen film, and somehow I hadn’t seen this one. It wasn’t, say, the best movie I have ever seen, but it was still good. It helped that I have never read Mansfield Park and didn’t know the story. Classic romance stuff. Worth the watch. 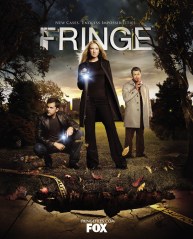 Fringe (TV series, 2008-2013). I have reviewed this before, but I have to re-review it because midway through Season Two, everything changes. Before, I called it mediocre and said it was like CSI meets The X Files. Now, it’s like CSI meets The X Files meets Lost meets Armageddon. Up until the point when I did my first review, each episode was highly episodic, built around a familiar skeleton of someone dies in a gruesome way, the Fringe team comes to check it out, they apprehend the culprit of some bizarre fringey thing before the third event. What you quickly discover after mid-second season, is that all the little additions to the overall plot were leading somewhere, and everything picks up in a whirlwind that I expect will keep up until the series conclusion, at the end of Season Five. Engaging and addictive. Way better than I previously said.

Anne of Green Gables (movie, 1985). I know I said previously that I would never watch the Anne of Green Gables movies because they would ruin my internal idea of Anne and Avonlea and everyone else (I have been adamant about this for years), but when I was reviewing the series last month, I suddenly decided that maybe it would be fine–even fun–to check out the movies. I have not been able to move onto the second and third one due to a Netflix snafu, but by next month I’ll be able to also review The Sequel and The Continuing Story. Anyhow, I did enjoy the movie, but not quite as much as I wanted to. My eight-year-old daughter enjoyed it more. Or maybe I’m being hard on it; we are both anticipating the arrival of the next disc.

Shakespeare in Love (movie, 1998). I watched this again after reviewing Tom Stoppard (the screenplay writer) and giving Shakespeare a fifteen-year-old effort. It was entertaining, but I still don’t love that movie. At all. It’s way to affair-y for me (and, as a note, it includes multiple sex scenes). It has it’s moments of beauty and maybe even poignancy, but overall it was sort of blah. No need to review it ever again. Not a fan.

Monster in Paris (movie, 2011). Picked this one for a family movie night. Thought it was one of those low-budget numbers that the kids get all excited about and then really sucks, but it turns out it is just French. I think everyone would give it a thumbs up, if not overly enthusiastic about it. My favorite part is the musical numbers (especially “La Seine and I,” which is still have in my head), but the whole thing was a surprise of animation and song. Worth the watch. 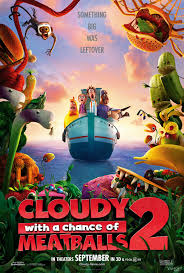 Cloudy With A Chance of Meatballs 2 (movie, 2013). On one of our very occasional trips to the theater, we paid top-dollar for this little gem. I love Cloudy With A Chance of Meatballs (the first movie), so this one measures up to about good. Then again, the kids reeeeaaally loved it (even though they can never get the full title out. It’s usually “Chancey With Meatballs”). Funny. Clever. And visually stunning, even though a bit lacking in plot. Your kids will probably love it, too.