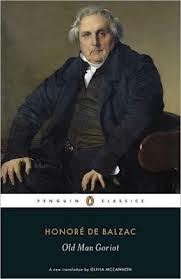 Well, this was the first book in my reading series that was just a quiet, non-difficult read. Even though it is over 150 years old, the translation made it very accessible. So I could sit back and enjoy. And enjoy I did. It won’t be rising to my short list of best books ever read, but I would like to–some time in the future–read more of the Human Comedy books. For that is part of what has made Balzac and his Pere Goriot famous: his use of characters as bridges between different novels about the same time and place. It’s somewhat novel these days (although I know at least one husband who would read a series just because of this phenomenon), but in Balzac’s day it was creative and innovative to re-use characters in different books.

I admit that I like the first half of the book more than the second. Eventually, I tired of the character of Goriot and also the long-winded speeches everyone kept making. (In the nineteenth century, their speeches were much shorter than those in The Odyssey, but still not as short as we would prefer.) Plus, in the old olden days, you could moralize as much as you liked in a novel. That, too, almost gets tiring. However, peeping in on the lives of young dandies and Parisian women is fascinating. If only the threads had come together with more of a bang and fizzle, I would have considered a higher rating. But it’s French, people. Therefore, French endings. It’s British classics that end in five weddings (as opposed to one funeral and unknown despair). It has it’s own refreshing element.

The other thing that makes Balzac stand out in a literary history is his realism. He gets accused of being too slanderous of society, but on the whole people have praised him for his realistic portrayal of contemporary (to Balzac) characters and French society of the times. There is romance, there is comedy, but Le Pere Goriot is largely drama, unfolding around the unsuspecting characters, moralizing us all and keeping us interested. 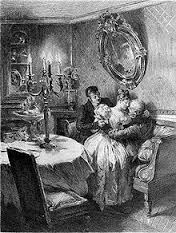 1897 edition of Le Père Goriot, by an unknown artist.

Quotes from the book:

“Who is to say which sight is the more horrible: shriveled hearts, or empty skulls?” (p4).

“Madame Vaquer, who must be about fifty years of age, resembles all women who have seen better days” (p8).

“Each lodger’s appearance hinted at a tragedy, either fully played out, or in progress; not a tragedy performed in the glare of the footlights against a backdrop of painted scenery, but a silent, real-life tragedy, so chilling it stirs and warms the heart, a tragedy with no final curtain” (p11).

“What kind of employment had knocked the stuffing out of him? What passion had left such a stamp of bewilderment on his bulbous face, which would have seemed overdone as a caricature. What kind of man had  he been?” (p12).

“…a burning desire to appear to possess qualities they do not have, they hope to take by surprise the heart and esteem of those who are strangers to them, at the risk of one day falling from grace” (p21).

“This is a time when a student is excited by insignificant things which to him seem very grand” (p28).

“Now I understand why they say there is nothing more beautiful than a frigate in full sail, a horse at full gallop, and woman full of dance” (p41).

“Accept that men and women are post-horses that you ride into the ground then leave at each stage, and you’ll reach the pinnacle of your desires” (p73).

“As soon as a few [bank]notes slide into a student’s pocket, an imaginary pillar of support rises up inside him” (p89).

“Rastignac had one of those heads packed with powder which explode at the slightest impact” (p90).

“Not everyone is lucky enough to have ambition, my sweet” (p95).

“Given that fifty thousand good positions don’t exist, you’ll be forced to eat each other like spiders in a jam jar” (p98).

“I don’t point the finger at the Rich in favor of the People: man is the same at the top, the bottom, and in-between” (p99).

“Our happiness, dear friend, will always fit between the soles of our feet and the crown of our head; and whether it costs us a million a year or a hundred louis, we all, inside, have the same intrinsic perception of it” (p124).

“When you have given each other everything, why would you worry about a fraction of the whole?” (p132).

“He was ready to sacrifice his conscious for his mistress” (p227).

“…proving that not even the highest-ranking members of society are exempt from the laws of the heart and do not live free of all sorrows” (p232).

“There is a God! Yes, there has to be! There is a God, and he’s made a better world for us, or this earth of ours makes no sense whatsoever” (p245).

“Even though there’s no hope, his human dignity must be respected” (p248).

Bonus: A Rastignac (the main character), in French, has come to mean a social climber who will use any means to better his situation.

Bonus two: I was fascinated to find that Balzac had basically lived the life of his main character, Rastignac.

Bonus three: There are several movies made of this novel, most French in origin and many well-praised (including a recent one with Gerard Depardieu and one called Balzac, about the author), but they are (unfortunately) difficult to lay your hands on. If I were to make an American movie of this book, I would call it Hotel Vaquer.