I know I thought I was sick enough in November to warrant a week off work, but that was nothing compared with this flu that’s raging through the states. And out of the four of us–yes, all four of us had it–I was the worst, followed by the wee one. I never actually got to hallucinating (like poor Eamon), but I managed some gibberish one morning during my five-day-fever-of-103-not-moving-from-the-couch-run when I had been up all night with terrible chills that racked my body with shaking. Just before Eamon woke with a bloody nose, then broke a mercury-filled thermometer. Wow. So please excuse me, again, for my absence. I am feeling like 95% better, and the holidays have been celebrated and set aside for next year.

Speaking of holidays, let’s go with a little year of 2014 retrospect coupled with some 2015 looking forward.

2014 was another one of those gone-by-in-a-blink years, which happen with increasing alarm each year I age (which, by the way, is every year). As far as writing and publishing go, I thought that 2014 would see at least two publications out of Owl and Zebra Press, but instead has weighed in at a big fat zero. To be fair to myself, I probably would have slid one in under the wire; I was all set to publish The Night of One Hundred Thieves in December, until I got sick and then sick again. I did launch a Wattpad book which is on section seven or so, back in the fall. I came up with a handful of great new ideas which are now filed with notes. I kept up with my writing group and with my once a month reading at the dessert shop. I blogged every single week until the end-of-year illnesses. I “won” Camp NaNoWriMo in April. And I ended up working on three, not two, novels most of the year. Starting in October or so, I vowed to go it one at a time, so really one of them is just about there. Still, you hate to have that blank year, publication-wise.

I have some thoughts and resolutions for 2015, and some of them are work related, which is where they pertain to you and this blog. Obviously, I resolve to publish at least two novels this year. Three would be better. And continue with the Wattpad book with one section every one-two weeks (although I expect it to wrap up no earlier than 2016). I also resolve to start work on at least one nonfiction book for Owl and Zebra and one MIddle Grades series. I resolve to blog once-twice every single week of the year, on topic with writing, publishing, or reading. And I resolve to read forty books by December 31, 2015. I also resolve to do a better job at book-keeping this coming year, and be more productive during my work hours.

Now for the best books I read in 2014. Let’s be clear: I actually did not rate a single book this year as five stars, except part of the Clarice Bean series. The Great Gatsby was close. But I did read plenty of four-star books, which means that I do recommend them, even if they aren’t destined to become an all-time favorite for me. Also note: even though my GoodReads badge refuses to admit it (you can’t count re-reads), I hit my goal of forty books this year. I actually read forty-one.

Recommended Literature and Classics, and one Fantasy:

Children, Middle Grades, and YA: 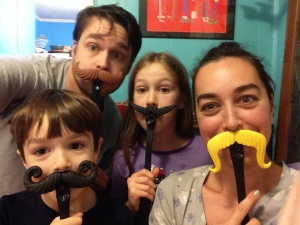 So Happy New Year to you! I am fond of this holiday, and of taking a day to reflect on the past year, celebrate the present, as well as look forward to the year. You never know just what you are going to be dealt, but it’s nice to have ideas and hopes for the fresh page. My personal goals include a drawing a day (with 642 Things to Draw), morning prayer, more thankfulness, etc. And I had a great New Years Eve, playing Mouse Trap, watching Earth to Echo, and eating pizza rolls and sparkling cider with my kids and Kevin. Hope you had a good New Years too, and here’s to a productive and successful year for Devon Trevarrow Flaherty, Owl and Zebra Press, The Night of One Hundred Thieves, The Touch, The Journey of Clement Fancywater, and The Family Elephant’s Jewels.