Well, I’m at it again. A couple of years ago, I was convinced that a Kickstarter bid for crowd-funding was exactly what I needed to finish my first novel (or, in this case, trilogy) and start getting it to agents. Just those couple of years later, everything has changed. I’m a die-hard self-publisher now, with my own publishing company, Owl and Zebra Press. In 2013, I published my novel, Benevolent, to good reviews, a hand-full of awards and book-front stickers, and lackluster sales. It takes time, they say. It might even take a backlist, they say. And more time.

But how to get to that deep backlist?

I am sitting on a novel which is just weeks away from relative perfection. I’ve got the paperback proof in my hot little hands. And I have–thank goodness a year and a half weren’t unproductive–two more novels somewhere over half-way there. But I need to apply for a copyright. I need new publishing software. Blah blah blah. And I am once more drawn, so much like the proverbial moth and the flame, back to Kickstarter.

A couple years ago, my bid failed. Its problems ranged from a vague budget to a lack of tangible costs (like childcare). But really, the failure was a personal one. Things came up. (And by things, I mean end-of-life moments and double funerals.) Once the bid was launched, I never touched the thing, and even though there was a faint glimmer of hope that I would be the one bid that made it without trolling the internet for a month straight–I let it go. Some things are more important than funding. Some things are even more important than publishing that next book right now.

So I feel the ominousness of a Kickstarter campaign like a sourness in the gut. No one likes to fail. Let me rephrase that: I don’t like to fail, I don’t want to fail this time, and I didn’t enjoy it last time. It’s like a blot on my resume that I rarely get the opportunity to explain. Part of me says, “What do I have to lose?” I get the bid or I don’t. If I do, awesome. If I don’t, nothing has changed. Except a blow to my pride. Perhaps losing has its benefits, too.

I mean, let’s be honest. Kickstarter has a 44% success rate. That’s decent, but we’re not cashing any checks yet. I am going to be yelling about it from the roof tops for the next nineteen days. I have a pretty decent network (whereas last time I absolutely did not). However, winning a bid requires a little bit of that pixie dust that modern society requires for almost any success, especially in the arts. It just needs the right person, at the right time, in the right mood, with the right thing on their mind… There’s plenty of talent out there, mooshed with even more people ready to convince you they have talent or merit. How to rise above? Perspiration and pixie dust. 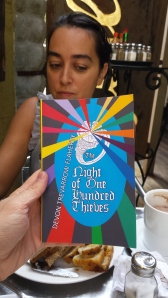 I know I’m good for it. I know my books are professional. I have so much I want to say to the world, so many stories buzzing in my ribcage to get out, and a deep affinity for the written word. How do you put your blood in the bid? How do you get people to even click on it? Hopefully my smiling face and a catchy title will do it.

So this post, of course, isn’t really about Kickstarter or crowd-funding; we’ll get to that in the next few weeks. It’s about, whuddya know, the dull roar of silence; the heaviness of the quiet after a joke; the raised eyebrows when you sashay into a room in that new dress; the crickets you hear after the modern publishing date. And it’s about (seems like my favorite topic) the grit it takes to be an author. In six months and three weeks from now I will be doing one of two things: chatting bulk shipping with my local mailman and sending packages of three paperbacks as gifts to funders while writing; or writing. Either way, the stories keep pushing outward and I keep humoring them. For better or for worse.