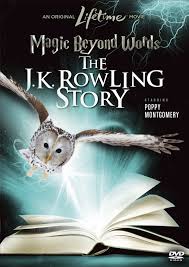 First thing I learned: her name is pronounced ROE-ling, not R-Ow!-ling. I had no idea.

Second thing: this movie is cheesy, sometimes painfully so. And yet, I did not want to turn it off. I guess I was willing to take it as it is: a made-for-TV Lifetime movie, and an unofficial biography at that. On the plus-minus side, the director appeared to stick so closely to what is known about Rowling, that the movie is sometimes, as Wikipedia put it, “lackluster.” I mean, for one thing, we all know the ending. For two, the writer/director did not seem to have over-dramatized. Both bad and good.

On the other hand, I found this movie extremely interesting because I am a writer, and Rowling is the most fiscally and fame-ily successful author of all time. (The movie portrays her as completely naive when it comes to ambition, but I can’t imagine this is completely so–even though many authors claim it of themselves. I know it’s not true of me. I want to make money and I want my books to be on bookshelves everywhere. I get wary of writers whining at me, “I write just because I love to write!” I know we’re in a position to work pro bono much of the time, but I certainly wish it weren’t so.) The movie really does relate to writers.

But then I was torn between wanting to know “How did this happen?” and realizing that it is a freak accident, of sorts. Not that Potter isn’t great, but so much of publishing depends upon an intricate, unpredictable, and long series of factors that writers call “luck.” You can sort of see this in the movie, but I was surprised that at the end they failed to mention that the lion’s share of Rowling’s earnings are from movies and merchandising. Books alone don’t make anyone billions of dollars. And this has only happened once in all of history. As I kept saying out loud, I would have emphasized–not Rowling’s middle-class hard knocks–but her normalcy and the sheer luck of her draw.

Then again, I was happy that the movie did not completely glamorize the process of publication, even though for Rowling it did (pretty quickly) end in unprecedented success. Most of the time, Rowling had to wait for things, just like the rest of us, and struggle through submissions, lack of confidence, lack of finances, the interference of real life, etc.  I was thrilled to learn that Potter wasn’t created–as others have claimed–in a moment. In her head, he sort of was. (Which I can relate to. In fact, I could relate to so much of her process and personality, as a writer. It was nice.) But overall, the idea took years to come to fruition, sometimes sitting for long periods in rumination and inactivity. I was also really happy to learn (if indeed the movie is accurate) that she did know the beginning before she published the first book, and that there were extensive notes involved, because one of the things I have always marveled at with Rowling is her ability to carry small things from page one all the way to the end.

In the end, I was thrilled that my husband couldn’t get enough of saying, “She’s just like you!” From her historical points: told she would never succeed in grade school; doodling to pay attention; under-succeeding in academia despite smarts; time on welfare; a messy desk despite attempts at organizing her life… Apparently the artistic personality is a real thing (that, and the writers’ life). I left the movie feeling moderately encouraged and my husband felt immensely encouraged. That’s a huge win, for me. I get encouragement here and there, but for my financier to feel that one day, after all this hard work, the sacrifices, and the time, I will break out and make it all worth it… that’s priceless.

One thought on “Movie Review: Magic Beyond Words”