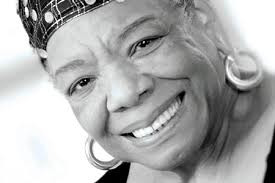 Far too quickly, I am writing yet another biographical eulogy for another literary giant. Maya Angelou died last week at age 86. She was another of my inspirations (I started out as a poet, did you know?) and her name is one even the lay-person would recognize. Not all too often does a writer gain such attention that they become recognizable, but Angelou was one of the famous writers for reasons beyond her inspiring, melodic, earthy writing: she was a true American personality.

In fact, Angelou may best be recognized, not by her face, but by her smoky voice. In a time when recitation and reading (as a performance) is dwindling and disrespected, Angelou remained the loudest and perhaps most talented of American readers. As such, she was asked to lend her voice to events from presidential inaugurations to documentaries. Recordings of her reading her own poetry and prose are among America’s finest literary treasures.

Not only is Angelou most famous for her series of memoirs (which are used throughout the world in schools and universities despite attempts to ban them), but she purposely set out to expand the idea of autobiography when she wrote them. Starting at the very outset, her memoirs are deeply personal, sometimes gritty, and always real. Because of them, she became a voice for not only herself, but for African Americans, for women, and for the oppressed. “She was respected as a spokesperson of black people and women, and her works have been considered a defense of Black culture” (Wikipedia). As for her poetry and essays, Angelou has always done well in sound bytes and bits, and her wisdom and introspection made her an oft-quoted person. 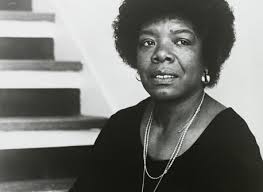 From Saint Louis, Illinois and Stamps, Arkansas, Angelou was born Marguerite Annie Johnson on April 4th, 1928. Her life was full of interesting facts and stories, beginning in childhood and continuing to careers as everything from writer and political activist to fry cook, prostitute, and nightclub dancer. She went to school for drama and dance, but at age fourteen dropped out to become a cable car conductor in San Francisco. She gave birth to a son only weeks after high school graduation, and worked as a waitress and cook, the sole bread-winner in her family of two. In the 50s, Angelou toured Europe with Porgy & Bess, danced on TV, recorded her first album, moved to New York, and continued to act off-Broadway and playwrite. In the 60s, she lived in Cairo as a journalist, Ghana as a teacher, and the United States helping Malcolm X form his organization, and then serving as northern director for Martin Luther King Jr.’s Southern Christian Leadership Conference. She acquired various languages while abroad.

After first Malcom X’s and then King’s assassinations, Angelou began writing. Her first book–a memoir–was published in 1970, I Know Why the Caged Bird Sings and propelled her into a soaring literary career encompassing memoir, novel, and poetry. She also continued writing for film and TV. She acted, directed, and narrated, including in such works as Roots (1977), Down in the Delta (1996), and The Black Candle (2008). She served on two presidential committees, was awarded the Presidential Medal of Arts in 2000, the Lincoln Medal in 2008, has over fifty honorary degrees, and has received three Grammy Awards. She was also the Reynolds Professor of American Studies at Wake Forest University, where she taught from the 1980s up until her death. She also did about eighty performances per year on her lecture circuit, from the 1980s until the 2010s.

She was, as her own website proclaims her, a renaissance woman. “Dr. Angelou is a celebrated poet, memoirist, novelist, educator, dramatist, producer, actress, historian, filmmaker, and civil rights activist” (official site). There was more life and talent in her pinky than many of us have in our whole bodies. Hers was a blessed life, sometimes toiling and sometimes celebrating, spent in service to us, her beneficiaries.

On a Bright Day, Next Week
by Maya Angelou