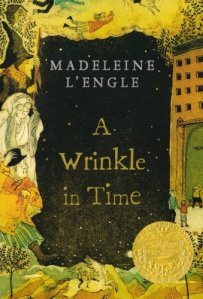 I have been looking forward to re-reading this book for years, so it was advantageous when the movie was slated for release around the same time it was coming up on my son’s fourth grade reading list. You see, it was one of my favorite books when I was a kid and I read it in fourth grade. When they made such a big deal about the movie with so much media buzz and all these special effects and Oprah Winfrey and Reese Witherspoon and Mindy Kaling, etc., I got so excited.

However, as Eamon and I were having a less than awesome experience with the books, the movie came out to disappointed reviews. So the whole experience took a turn I didn’t see coming. 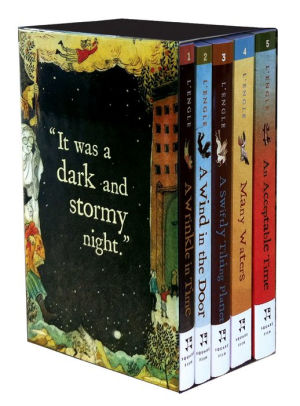 The series, called the Time Quintet, are as follows:

It’s true. I did not love the books as an adult. The first few chapters I was enthused, ecstatic, enjoying them with childlike abandon. The Murry home was warm and interesting and you just wanted to snuggle down into the characters (well, maybe except the twins) and grow up among them. Plus, what was about to happen? What was up with all the mysterious hints? Where is Dad? And how are all the character’s faults going to resolve? How are the characters going to change? To learn and grow? The setting, the plot, the thoughtfulness: it’s all there in the set up.

And then. I hate to say it, but A Wrinkle in Time doesn’t deliver on its promises. I know that it is a much beloved book and won awards and life-long fans and all sorts of things. But I just don’t see it, not from a literary criticism standpoint. Or, unfortunately, even from an enjoyment standpoint. The plot fizzles over and over again. Things get disjointed and pacing jerks the reader all over the place. The story dissolves into telling instead of showing on many occasions, and sometimes is completely illogical and/or forced. The book, after the first few chapters, felt like enormous potential with very little to encourage a reader to keep reading except for the initial connection and questions. (I am also aware that the inclusion of the twins, at all, as well as the cliched first line is a clue that placing your entertainment in L’Engle’s hands is going to a little of a gamble.)

Wrinkle is not horrible, it just isn’t complete or cohesive in its sparse gleams of greatness. I don’t think it deserves the place it holds on many people’s best-of lists, but I also really hate to be mean. L’Engle has something to say (note: she is obviously a Christian and a lover of the sciences) and she has given us characters and place and even some alluring ideas about a greater universe. But the journey through all of it? A rocky ride.

My son and I continued through the series, anyway, which is what I had done as a kid. Well, we continued through for a while, though the books don’t actually work in any way together as a narrative trajectory. In other words, they can all stand alone and take place in the characters’ lives and home apart from each other. I found this surprising, given how huge the story from the first book could have been.

We didn’t finish the third book. I rarely stop a book once started, but I was officially only committed to A Wrinkle in Time, the first book, so I felt okay calling it quits on a series where one of the characters sat there the whole time. I wasn’t enjoying and my son wasn’t enjoying, especially when Mark Twain and Lemony Snicket were beckoning. (Tom Sawyer has its own challenges, but we’ll deal with that later.)

I don’t want to go on and on about it. I loved the book as a kid. Many people love the book and the series. I read it as an adult and I found it to be lacking in several ways. I am still nursing my disappointment. And I move on to the next great book. If you want to see someone agree with me in a much more eloquent way, read this Washing Post review. 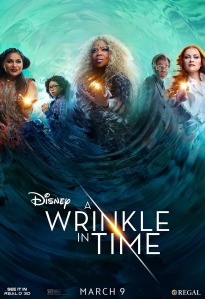 MOVIE: There’s nothing that I’m going to say here that hasn’t been said recently. The movie could have been great and certainly put its money where its mouth was, pulled out all the stops. I don’t envy the writer and director, who were stuck with a very difficult story to whip into shape. But they were given a weath of ideas, characters, visuals, and magic to work with. They did go to town. The movie just didn’t quite work out. Part of it was the source material. Part of it was trying to remove L’engle’s ideals from the story and be ultra-modern about it. It’s supposed to be quaint. No matter how they might have done it better, they didn’t quite make it. But despite the bad reviews, it was still an okay family night movie. So not terrible and visually exciting.