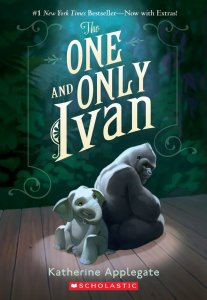 In the scope of things, this is not what the book is ultimately about, and it’s fairly ignorable (if you find yourself bothered by it, as I did). The reader is expected, like with Stuart Little or Charlotte’s Web, to suspend their belief. As a matter of fact, Ivan is remarkably like Charlotte’s Web¸ which hadn’t occurred to me until just now. Ivan is Charlotte, Ruby is Wilbur, and there you have it: one animal does a miraculous thing to get the humans’ attention and save another animal.

It is a novel, but it is written in freeverse poetry. It is the second juvenile poetry novel we have read this year (the other being Inside Out and Back Again). It is unlikely that my reluctant-reader son will ever fall in love with a poetry novel. Poetry requires a certain appreciation of language itself and with expression as much as story. I, on the other hand, really enjoy poetry. And yet. I don’t seem to have stumbled on a story here that really needed to be poetry. It seemed forced and clunky, in fact. I didn’t find the poetry true to Ivan’s voice and it’s not like it emerged from the story, either. So, perhaps it was disjointed at the expense of author choice.

I also remained curious the entire time about Ivan’s connection with art. That is integral to the story, but it felt forced, too. I had to be told, over and over, that Ivan liked to do art because we never really felt it or were shown it. And we all know how I feel about telling instead of showing. “Unconvincing” is the word I am looking for. Ivan didn’t feel like an artist but Applegate really needed him to be one. And not only do I not feel like he’s an artist, I was left unfulfilled when it all of a sudden connected for him. While he had spent years doing drawings that were disconnected from reality (which is, uh, believable) there was no real reason why he should suddenly be able to make sense of it. It lacked an explaining force, I guess.

Then there’s the whole animal rights angle of the story. I mean, I do believe we should be responsible and compassionate in how we treat animals, but Ivan’s thought processes could be confusing to kids, who might grow up believing in a higher level of inter-species communication and self-consciousness and advanced deduction, etc.  There are limitations to our likeness to animals, whether we like to admit it or not. And while I believe we can use magical realism or fantasy to make connections that don’t exist to explain reality, I found Ivan to be a bit confusing.

I think there’s depths to the fictional story here to be explored, but it only ends up hinting at it, in the end. Ivan’s few uncomplicated relationships are what makes it sweet. The art and animal rights angles tend to distract from the purity of the story which is ultimately about relationships. In the end, it never ends up exploring very deeply the more complicated relationships in a fulfilling way, like with Mac. There are hints of things which never quite develop. In its brevity, The One and Only Ivan sets you up and expects you to come to the regular ol’ conclusions. But I’m used to literature which explores the blurry areas more, which this could have easily done. I’m no PETA marcher, so I want to explore animal confinement. How do they get there? How are they treated? What does that mean for them? Not to glaze over everything so quickly. And this would be hard to do, considering that Ivan is sitting on a line between reality and personification. So maybe the thing that bugged me from the beginning is that: is Ivan real (he was inspired by the real Ivan)? Or is Ivan a lovable Silverback character with fantastical human traits?

In the end, I’m not going to fault this book too much. It’s meant to be children’s literature, to introduce kids to freeverse poetry and make them think about animal rights, all while enjoying reading and getting lost in a story. I think the book does all that, though my child wasn’t really that interested. Now that I think about it, he never has favored the lighter books. He seems to like some complexities, some dark and light areas, and either realism or fantasy, not an in-between. And I don’t think he’s alone.

This isn’t a bad book for an elementary reading list. There are scads of kids who have enjoyed it. But we didn’t fall in love with it and didn’t hate it either.

One thought on “Book Review: The One and Only Ivan”

Currently reading How Nonviolence Protects the State, by Peter Gelderloos and My Bright Abyss, by Christopher Wiman. Also, taking a detour for October-December for some holidays-related reading.

With my son, I'm reading Walk Two Moons by Sharon Creech and reading ahead of him: Lyddie by Katherine Peterson.

The next books to review are Little, Big by John Crowley and Frankenstein by Mary Shelley.