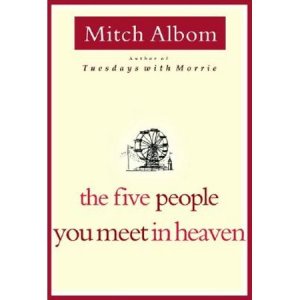 Well, The Five People You Meet in Heaven is a quick read. And if you like morals with your stories–if you want to walk away introspective in a Halmark-movie sort of way–then this could be the book for you.

What did I think about it? It’s certainly easy to read. It’s interesting and moving. You’re always wondering something, since Mitch Albom sets you up at the beginning with an overt cliff hanger. Did he save the girl or didn’t he? And you know darn well he’s not going to tell you until the end. I don’t really enjoy writing negative book reviews, but I enjoy less being dishonest. Reviewing a book like The Five People You Meet in Heaven is a trap: you’re going to step on some toes no matter which way you go. Like Lyn from Goodreads said, “most people will either like it a lot and find inspiration and meaning, or loathe it entirely and dismiss it as drivel.” And some of those who like it a lot have really adopted it into their lives, it has meant something to them, maybe even affected the way they are living. (I also appreciated another GoodReads reviewer who said “Atheists shouldn’t read books about heaven” and expect to like them.)

Also, there’s some sort of things in the life of Albom himself that have different people’s knickers in a twist. He writes a newspaper column that makes people upset sometimes. He crosses picket lines? He spent a lot of time bashing J.K. Rowling and Harry Potter. And for this, sometimes his books don’t get a fair read. Well, I don’t really know much about Albom and, perhaps in this case, it’s better to leave it that way. After all, I am a Potterhead, and a devoted Slytherin.

The Five People You Meet in Heaven is about an older man who has lived a pretty disappointing life. He dies trying to save a little girl and instead of a tunnel with a bright light leading to pearly gates (at least so far), he is faced with a series of encounters with people whose lives touched his. From each one, he must learn a lesson. Some of the people he knew, some he did not. We see a lot of reveals, and some of it seems very, well, arbitrary, a slave to the story itself.

Let’s just assume here that this book is full of advice and scenarios that have meant something to many people. Literarily, the book is so-so. Like I already said, it’s easy to read, so  we’ll give Albom clear and concise. Occasionally you might call the writing nice or pretty, but there is not much challenge to it, in either the reading or the writing. It lacks depth, a little, and complexity in the story-telling. You get it, then you keep reading because you want to see the ending and who all the five people are going to be. I do think that the word “trite” can be applied here, though not all of us are looking for an artistic experience or are trying so hard to be hip.

One of the things I did enjoy about the book was the setting. I liked the idea of having an old carny fix-it guy as an antagonist, and I liked to see the seaside amusement park through the years of history.

I read it. It was okay. It would be easy to pull down off the shelf at a beach rental and read it before you leave. And if it speaks to you, more power to you. I’ll be reading something else next.