Yes, yes. I am currently at my writing residency. But I have put a LOT of words on the page today, and I always try to keep up the blog. So, this is my “break.” Fresh reviews.

I have admired, sometimes at a bit of a distance, Chris Van Allsburg since I was a kid. I recall my aunt checking The Mysteries of Harris Burdick out at the library, and setting it in my hands. I was still in elementary school, and man were those illustrations beautiful and interesting to look at and… CREEPY! There’s just something about Van Allsburg’s illustrations: not all of them, but many of them. He has this way of infusing them with some serious creep factor, though it’s so hard to put your finger on how (sorta like M. Night Shaymalan or Cloverfield for kids). But set the spine-tickling aside (though this is reason enough to check out some of his books), and Van Allsburg is still a very talented illustrator, and very talented story-teller, and the author of more than a few modern classics in picture books. 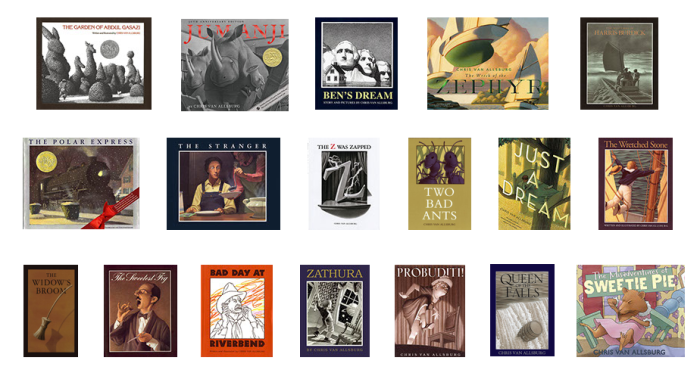 All but two of the books (Riverbend and Sweetie Pie) have illustrations done in the same, Van Allsburg-y style. Mainly black and white, tightly detailed, meticulous, and absorbing. His illustrations make you want to sit still and look at the book, not just read it. I have not read all of his books, but the ones that I have are so solid, I suggest that you go fill up your library book basket with every title they have, and then you’ll see for yourself: you certainly want some of these on your picture book shelf, if not all of them. 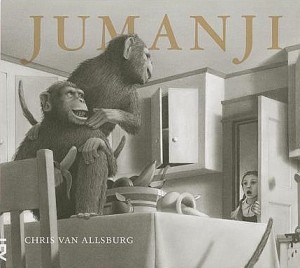 Today, we are concentrating on Jumanji and Zathura, books that are not sequels, but “spiritual sisters.” They do have many similarities, and they were both made into popular, well-reviewed movies. And now? A new Jumanji movie, that’s subtitle will make you want to sing in a terrible accent (Welcome to the Jungle), has hit the theaters and garnered much unexpected praise. After years of enjoying the original Jumanji and Zathura movies on DVD (not to mention my son’s Zathura-themed birthday party), my family rented Welcome to the Jungle for movie night last week.

Now, I have a thirteen-year-old girl and a ten-year-old boy. My husband and I are picky, and prefer different genres. It is NOT easy for us to settle on a movie or to all enjoy it. However (Hallelujah Chorus prompt), we all really enjoyed this movie. And the best part?: when we were all laughing out loud together. (There was only one scene where something inappropriate for my son was said, but it went over his head.) Let’s rewind…

The Jumanji movie’s based on the first movie, which was based on the book. The book is a bedtime read for a child, and—like I already pretty much said—is a snuggle-up-and-look-at-the-illustrations kind of thing. It gets an A+ just for being what it is. Zathura is similar to Jumanji, as they are both about being sucked into board games and having to play your way out of them. Jumanji’s theme is jungles, Zathura’s is outer space. You could read them both, or stick with the topic that would more interest your child. (I would also recommend Zephyr, The Mysteries of Harris Burdick, The Z Gets Zapped, The Stranger, and Two Bad Ants, just to begin).

When Jumanji, the movie, came out in 1995, Robin Williams was a big draw, and Kirsten Dunst a teen who had just snagged awards for her first big appearance in Interview with a Vampire. It was a blockbuster that also earned its chops. It’s still a great movie to watch with kids and really takes Van Allsburg’s story to an obvious place (without trying to capture that creepy quality quite as much as it could have, I think). Again, super family movie about a couple of kids who (we have to give them bigger stories), following their parents’ deaths, move with their aunt to a huge, run-down house, where they keep hearing drumbeats. They uncover an old, dusty board game and freaky things start to happen, including the appearance (cue Robin Williams) of a quirky and lovable man who has been trapped in the game since he was sucked in, as a child, years before. They all quickly discover that in order to survive, they have to win. What they can’t do is stop playing. 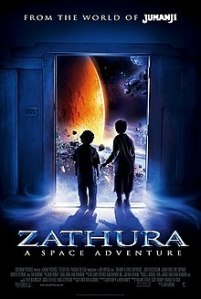 Zathura, the movie, is very similar. There was more star-power (Dax Shepard, Kristen Stewart, Tim Robins, and Josh Hutcherson), and another blockbuster. I was at the wrong age when this movie released, so I can’t tell you just how it did or how popular it was at the time (2005), but in just a few years we would own it and be enjoying it on repeat. The two boys in the story here find the game on the shelf at their dad’s house, and are immediately transported (with their house and sister) into outer space. They figure out they have to win against the game (hostile aliens, meteor showers, you name it) to survive and get home, and again, can’t simply give up. Again, a character is trapped in the game (this time, with a surprise twist) and shows up to help them. Another great family movie.

When Jumanji: Welcome to the Jungle started previewing, well, I saw the title and thought “Awesome!” and then I saw the preview and thought, “Plllt!” It looked like a horrible mockery. Alas! It’s totally not. It is an (unbelievably) successful modernization of a slightly outdated story. It’s not just about taking a board game and making it a video game (which it did tremendously well, incidentally), but about updating the humor, the situations, giving it a slicker look, a hipper feel… and still preserving the magic of the story. Can you tell I loved this movie? We will be watching it again.

The only issue is that Welcome to the Jungle is intended for an older audience than everything else. In a perfect world, your kids would grow up reading the books at bedtime. When securely in elementary school, they would get both the movies for their birthday or Christmas or something and watch them to death. When they’re in the “middle grades,” you would sit down with them one pizza night, one arm around them and the other drawing pizza to your mouth, and enjoy the hilarity of Welcome to the Jungle together.

And we’ll talk about The Polar Express another time.