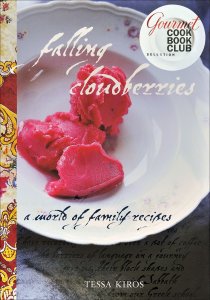 I apologize if you saw this review and clicked on it because you thought, Look at that beautiful cover, and “falling cloudberries?” Poetry? Literary fiction? That sounds super intriguing. Because this is not a novel, and since no one can read the cute-yet-obnoxious font that was chosen for the subtitle, you didn’t know that the full title is: Falling Cloudberries: A World of Family Recipes, by Tessa Kiros.

(Incidentally, the font choice may be the only thing I don’t like about this book. I’m with everyone who thinks the font looks great, but when you try to read the chapter headings to get your bearings (since you are moving around the world,) fuggehtaboutit. It’s illegible.)

I was predisposed to like this book. A friend brought it up in conversation months ago, telling me it was the cool cookbook in the Ireland of a certain time, and that many Irish families had a copy on their shelves. She thought I would like it. And perhaps she wanted to inspire me with more dessert recipes, as she cozied up on my couch week after week with fresh-out-of-the-oven cupcakes, tarts, and cookies. A couple months later, and she texts me to say she has a gift for me, so make sure I connect with her. I was intrigued. The next day, there she was, sashaying down the hall with a heavy parcel, wrapped aptly in an antiqued map of the world. I opened it and was delighted to find a copy of Falling Cloudberries, which is a beautiful book, decorated with vintage prints and colorful, laser-sharp photography, enjoying it before I had even cracked it open by feelings of both nostalgia and adventure. 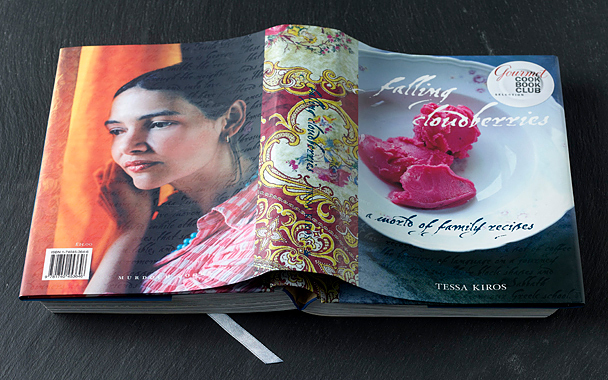 In some ways, this book is less a cookbook and more a travelogue. It took me almost until the end of the book to realize that the writing was probably pulled directly from the diaries that Kiros kept while growing up in several different cultures and countries (sometimes permanently, sometimes on regular trips). Without her life story, the collection of recipes makes no real sense, so we go along with her, drinking in the larger-than-life photography and the poetic strands of words. The book is divided into sections:

I have to admit that I found her actual writing to be bordering on affectation, at times. I think, now, that this can be explained by having pulled the writing straight from journals. But I lamented those paragraphs, knowing that in time, Kiros could become a much better writer, and I wouldn’t feel like she was trying too hard and ending up with a slightly immature voice. If you can just let that go–the trying too hard–you can really get lost in the atmosphere of this cookbook and possibly even come to treasure it.

I loved flying with Kiros across seas, across time, to share her vivid, almost tangible memories. She paints all of them in bright and pleasant colors, and there’s no way to escape without marking nearly all her recipes with a star. I haven’t actually tried a recipe yet (I am making the berry cheesecake on Tuesday), although there is nothing super-fancy about them. The recipes are simple and straightforward and–as she points out–without wonderful ingredients, your attempt will fail. I also think it likely she cooks with that brimming scoop of love in every recipe, which you will need as well.

Not to downplay the recipes, for they are very well-chosen. You could own this one cookbook and be okay. You would have, all in one place, simple foods, impressive foods, foods with varying taste profiles, and sturdy recipes which can make up the bedrock of a gustatory life, which is exactly what these recipes have been for Kiros. Some of the ingredients may prove hard to get in the U.S., but I believe the majority of the recipes are accessible to the same sort of person who would pick up this book and take it along to the market, and could create the basis of a young person’s kitchen repertoire, especially for entertaining. It would make a fine wedding gift.

A Random Assortment of the Recipes:

My affection for this book is not usual. What I mean is that I love-to-pieces my quantity-heavy books, and I also tend to eschew cookbooks with too many pictures. This book, though, is meant to be the most useful coffee table book that you own. It is both presentable and pragmatic, and the marriage is a bit magical. Love it. And I think you will too.