On my way through the most lauded of the Arthurian writings, I arrived at Mary Stewart and her Merlin Trilogy. I happened to have four of the books, so I did not realize that only three of them comprised the trilogy, while the fourth was one of two peripheral books. The series is as follows:

I read original Hodder & Stoughton volumes, and only the first four.

One of two things seem to have happened. The first: that I read some awesome Arthurian series somewhere, sometime, then lost or returned them, and since they are not listed on any best-of lists, I will possibly never find them again. The second thing that might have happened: I read a handful of Arthurian series, including Stewart’s and White’s, got them all sloshed together in my mind, aggrandized them, and now can’t find one to live up to my remembered expectations.

I think it’s the latter, unfortunately.

So this is the last set of Arthur I am going to review (not including some middle grades and the classics  (Mallory and Sir Gawain)). As I sorta mentioned, it did not completely live up to my expectations. It was very fluid, interesting, and betimes great writing. Stewart’s writing hits many levels, from battles to love, which probably stems from her unlikely background in romance. But overall, I just wish it had been a whole lot better. 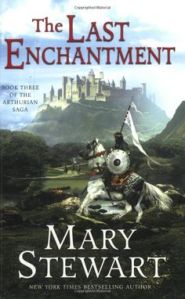 And I most certainly would have stopped at The Last Enchantment, with the completion of the trilogy. If I read the other two, at all, I would have read them much later, and divided them from the series in my head. If at all.

I’m not even sure what more to say. The books kept me interested, beginning to end, but only mildly, as I was never truly absorbed. I really think the fault of the entire series lies in Stewart’s use of one, firm narrator. It was a real stretch sometimes to cover some of Stewart’s story, using just Merlin. Obviously, he couldn’t be everywhere all the time, and sometimes he was just too unattached to make the classic stories fresh or lively. Of course, Merlin is one of the coolest of Arthurian characters, but if the story had even just shifted to Arthur in the second book and Guinevere in the third, we might have seen more drama…

I was also confused by how much her stories resembled Stephen Lawhead’s. Hers were written a decade or more earlier than his, and man are they too close for my comfort (variant time period, magic realism instead of fantasy, etc.). I understand they come from the same legends and the same source material, but, like I said, I was uncomfortable with it. And it left the work feeling unoriginal (though it should have been Lawhead’s that felt that way.)

And while some of the other series were steeped in the Christianity that helped to sculpt the original legends, this series was the opposite. It skirted Christianity, writing it off when it had to deal with it. Instead, we get some twist on a utopian society where you can sleep around as much as you like (the men are compelled to and the women are just gagging for it), because you’ll be taken care of if you happen to birth some lord’s or king’s bastard and where gods do not demand allegiance or even acknowledgment in order to choose champions. As if.

Also, while I did keep reading, the stories felt fragmented and didn’t always have a strong drive forward. By modern standards, they were slow and disjointed, and even–can I say it?–unfulfilling, as were all of the characters. As Lulu’s Bookshelf put it, “As a retelling of Merlin’s early life I guess the ideas are quite interesting, as a story in its own right it’s simply dull. The elements are all there, but they’ve been stuck together with Plasticine.”

Overall, an okay read, but far from perfect. In fact, quite undeveloped, and yet I wouldn’t stop you from reading it.

“…as if my life were a growing tree which burst to flower and leaf with him, and now has nothing more to do than yellow to the grave” (p11).

“I shall know when what I foretell is human instinct, and when it is God’s shadow” (p198).

“But I had begun to learn that in fact power made nothing smoother; when it came it was like having a wolf by the throat” (p252).

“One did not lie awake looking for reasons; one obeyed, then slept” (p324).

“The gods do not visit you to remind you what you know already” (p329).

“…and if soldiers decide something is lucky, then it is lucky” (p341).

“…the god does not speak to those who have no time to listen. The mind must seek out what it needs to feed on” (p352).

“There was not time to search for the words that one could use to a king” (p395).