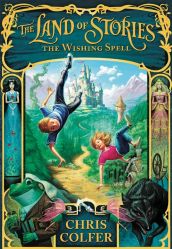 The Land of Stories series, by Chris Colfer, published from 2012-2015 by Little Brown. The series consists of four books so far, and Colfer says the series will end with the fifth book, assumed to be published in 2016. I read the series because my daughter–and just about every other kid her age–is in to the series, and there was no way she was waiting until next year to read the first four.

I really don’t like giving scathing reviews. But I don’t know if there is any other way for me to do this. I want to be all nice and give Chris Colfer a pat on his talented back, but for this, I can not. Absolutely. Can. Not.

I’m not exactly sure what it is about this series: the idea, the cover art, the marketing… but you want to like it. In fact, even as you are reading it, you still want to like the story. But there are so many obstacles, so many many obstacles, which begin with predictable and been-done. I knew almost all of the outcomes from near the beginning. I love the GoodReads review from Brett Axel, that asks, “What if C.S. Lewis, instead of honing his writing skills, watched lots of Shrek and Hoodwinked movies?” We are already getting to the point where we’ve seen way too much fractured fairy tale, and this one takes the been-done cake.

Which in itself would not be terrible. Doing something “old” well justifies itself if you do it well enough. But this one, not even close. Let’s just jump right in.

My daughter mentions frequently that mostly girls are drawn to the series. It doesn’t take a rocket scientist to figure out that only girls are going to tolerate all the outfit descriptions. Every time we encounter a new character, action pauses and Colfer gives a straight-forward, bland description. Example: “The Snow Queen was a tall woman with a large white fur coat, a snowflake crown, and a cloth wrapped around her eyes. Her skin was so pale and frostbitten it was practically blue. She had a strong jaw and tiny jagged teeth.” (By the way, where are the serial commas in that?) Mostly what a reader gets from this book series are prompts to imagine the story along with the writer. Mostly girls are going to enjoy this type of visual, especially about skin tone, clothing, and hair, not to mention the castles, throne rooms, and thrones. Then couple all that with the terrible action scenes. No, really terrible, and boys just aren’t going to be quite as interested.

But that’s just the tip of the iceberg, a random introduction to the issues with this series. Here’s a list of some of the many, many things that constantly distracted me from enjoying the books (and yes, I read every word of the available books):

If you name a writing rule, it was broken ten ways.

I have to mention it again–and I also want to point out that I have company in this opinion–that I really felt like I was reading the work of a very determined teenager. And while I applaud the effort, I would rather see the content in someone’s more capable hands. Or not at all… I mean, this story has been told before, and it wasn’t nearly as cheesy the first time around.

What I really wonder–and was even distracted by the thought as I read–was if Colfer should have written this series as a screenplay, instead. Especially when you read sentences like this: “Reruns of a dramatic television show set in outer space did nothing to stop his procrastination.” Or, “The Enchantress forced out a theatrical laugh that did little to comfort him.” Dramatic television show? Theatrical laugh? This would be great for staging direction.

And the thought is furthered by all the telling, instead of showing. Like this: “The Evil Queen looked down at him coldly. She had no sympathy left inside her for anyone.”

By the time I got to the second book, I was hoping the writing had drastically improved with the series’ popularity. Even the first couple paragraphs have you going. But then right there, near the beginning, I was sad to be submitted to a terrible (and slightly insulting), in-no-way-covert attempt at arguing with his critics. Colfer highjacks a character to argue for him that writing does not need to be “high” writing, as long as it has passion. But let’s be honest. Simple writing includes the likes of Ernest Hemingway and William Carlos William’s wheelbarrow poem. The distinction between “simple” writing and “high” writing is not one between “good” and “bad,” or even between “passion” and “dispassion,” so Colfer is arguing oranges and apples, and doing it in the wrong place, besides. Passion may be a boon, but it does not make up for other things, like hard work, practice, education, natural talent, quality, etc. It’s like Colfer’s arguing for the participation award. Let’s compare these “simple” sentences:

“so much depends / upon // a red wheel / barrow // glazed with rain / water // beside the white / chickens.” -William Carlos Williams, “The Red Wheelbarrow”

“‘They’ll keep out of my way,’ she insisted. ‘It takes two to make an accident’” -F. Scott Fitzgerald, The Great Gatsby

“‘Fish,” he said softly, aloud, ‘I’ll stay with you until I’m dead.'” -Ernest Hemingway, The Old Man and the Sea

“Aunty had a way of declaring What Is Best For The Family, and I suppose her coming to live with us was in that category.” -Harper Lee, To Kill a Mockingbird

And I’ll have you know, as beautiful as all this writing is, Colfer has better ratings just about anywhere. Oh. My. Goodness.

I was so frustrated at one point, reading the book, that I stopped on the sentence I was at and asked, how would I re-write this? The sentence then went from “What had once been an imposing structure was just a massive pile of stone bricks and pieces of wood now,” to: What was once a majestic fortress had been reduced to a mountain of broken stone and splintered wood. Do you need me to walk you through the problems with the first sentence? It’s weak, imprecise, choppy, anachronistic (dimension-speaking), and distracting. I could do this to any sentence in the whole series, except for (maybe) the first paragraph of the third book, which Colfer seems to have polished up especially well… that is, until a carriage is shooting “like a cannonball” through a dense forest with a narrow, curvy path.

The real battle here is NOT whether or not Colfer’s style is simple, but whether it’s bad or worse and whether or not that means we should avoid reading it and discourage our children as well. Should we swallow a very popular book and all its bad art with its vaguely intriguing story and color-matching faeries in order to have some entertainment? One of the things that can really drive a person crazy in the arts biz is just this quandary. Because, while people swallow bad art in the name of being entertained (or titillated) every day, there are so many artists out there willing and trying to provide a product that is both beautiful and entertaining. In this sense, it matters more who holds the keys to the kingdom and not who’s making royalty-worthy art.

And why aspire to great, or even good art, anyhow? What if no one wants it? Is the aesthetic a value unto itself? Is it a question of truth? Or reality? Or physicality: symmetry and alliteration? Or a Platonic form or God-ward longing? Are truth and beauty their own rewards? And am I in the position to encourage others to find the gems among the rough and discourage the fool’s gold?

Yes, I suppose that is exactly why I write reviews. After all, I don’t get paid for telling you if a book series stinks or if a novel deserves a standing ovation. And not that I am always correct in my reading. But while on one hand I want to be gentle and kind, I also feel excited to exalt the worthy or to push the mediocre to rise to the occasion.

So in the end, I find this extremely popular series to be terrible to a fault. My daughter reads it. No, she loves it. She is ten, and she anxiously awaits the next book, which I will buy for her. I would not say that reading bad literature is exactly harmless fun, but I will point out that I survived far worse than Land of Stories, and I expect my daughter to–through a life of reading and conversations with myself and others–eventually see the series for what it really is. She’ll probably fall in line with the rest of us, War and Peace under one arm and a battered old copy of The Wishing Spell under the other.

8 thoughts on “Series Review: The Land of Stories”