Jane Eyre, by Charlotte Bronte, published in 1847. I read the Barnes & Noble Classics edition, because it was given to me for free, but I did not read much of the front matter.

Jane Eyre is a Western classic, easily on any list of top 100 novels of all time. Part of what makes it intriguing, to me, is that it is one of the earlier books that give voice to a woman, and it is also one of the products of a trio of English sisters who each wrote books and poetry that would become extremely famous. Bronte did not live a long life, but after being a teacher and governess and producing a book of poetry with her sisters, Emily and Anne, published the semi-autobiographical Jane Eyre. She also published Shirley and Vilette, before dying at age 39.

While fascinating, her life story is brief and pathetic. She was raised by a strict, Anglican pastor father and, when her mother and two eldest siblings died, her aunt. (Her eldest sisters had died while four of them were at a girls’ boarding school and they fell ill.) The Bronte sisters’ writing began with a box of toy soldiers, and they play-acted a land called Angria which they would write shorts about. Charlotte was known to be relatively ambitious and dominant, and returned home to the surviving sisters she missed, after a short career away. The sisters planned to start a school, but their advertisement did not solicit a single response. Instead, Bronte found Emily’s poetry and published a collection of the three sisters, under the names Currer, Acton, and Ellis Bell. Her first novel was rejected for publication. Bronte had long been a writer, then, when she published Jane Eyre at the age of 31 (the same year Emily published Wuthering Heights and Anne published Agnes Grey), under the masculine name Currer Bell. She published two more novels in the next few years. By then, her two sisters and her brother, Branwell (a drunk and drug addict), had died as well. Bronte had by then revealed herself as Currer Bell, and was drawn into the literary life and prominent circles. Bronte married Rev. Arthur Bell Nichols–a man she did not particularly love, but admired–and died a year later, during pregnancy. It is speculated that her bout of pneumonia was a way for her to die, and she took it rather than be cured. The Professor was published posthumously.

Jane Eyre is considered important beyond entertainment for two main reasons. First, it is the first of dramatically self-exploratory fiction which we now take for granted. Second, it was ahead of its time in its exploration of religion, proto-feminism, and classicism. Themes include home and family, love, maturity, passion, gender, social class, religion and morality. It is still a very popular book, and hundred of people have spent their careers and/or lives studying and enjoying it.

I enjoyed Jane Eyre, but not, perhaps, as much as I expected to. It isn’t a favorite, but I also would not object to a re-read at a later date. There were parts that were thrilling, and the prose is exacting, clean, and beautiful. However, the pacing in the second half is odd, I think, and I found the fourth section obnoxious. When I started watching one of the movie adaptations, I was hit by the brilliance of making the fourth section (when Eyre stays with the Riverses) the skeletal structure of the whole story, telling it from that point. That way, the Rivers don’t just pop out of nowhere and feel like a distraction to what we are already invested in. Alas, that’s not how it is, so the fourth section stays as it is. Unless you are making a movie.

Of course, I would recommend Jane Eyre, for anyone who likes (or can even stand) classic literature. It has a romantic bent, but the deeper sides of the story are also important and enjoyable. I am forever reluctant to see Eyre through the lens of modern feminism or atheism, but it is fascinating as an exploration of a female perspective on gender and class during the time period of the Brontes, as well as a thoughtful foray into the topics of passion and discipline, maturity and immaturity, and bitterness and forgiveness. There were times when I found the first person to be limiting and distracting, and other times when I thought it brilliant. Overall, I am glad to know Bronte was pioneering the style and intrigued by the endless exploration made possible by the fact that the whole story is told from only one perspective. I suppose that is why we have so many adaptations, and why The Wide Sargasso Sea exists. Where was Jane mistaken? Where was she blinded? What is it that she couldn’t see, that we can read into the narrative?

And a few more random observations: 1) Part of the appeal of Eyre is its combination of the different elements: coming-of-age, romance, mystery, etc., and its combination of dark and light tones. 2) In the flavor of a nineteen-year-old woman (although, I suppose the voice should be that of a thirty-year-old), the story gets overly dramatic and unrealistic, at times. My husband–watching one of the adaptions with the one eye that was not on his own Kindle–questioned a romance between a governess and a landed Lord. I would be more likely to complain of scenes like the one where Eyre runs away without a word or a penny (effectively) or a plan. But, like I said, she’s nineteen. 3) One of my favorite themes of the book is ambition. If you are looking for a book about ambition, this would be a good one for you. 4) Eyre seems to know herself too well. I think we get this impression partly from the first-person narrative style, but Bronte never really gives us obvious reasons to doubt Jane on any front. No one knows themselves, or others or their circumstances, that well. 5) As much as I do NOT normally have a problem with a successful, smooth jumping of narrative perspective, I found Eyre‘s random paragraphs in the present tense to be quite distracting and unsuccessful. I can see why she does it, but I don’t think it worked.

I will be reading The Wide Sargasso Sea–a popular novel based on the character of Bertha Mason–soon, as well as Bronte’s other works; The Professor, Shirley, and Villette. I am also tempted to continue with her sisters and read Wuthering Heights, Agnes Grey, and Poems. 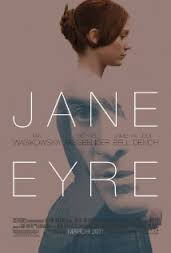 When faces with the many adaptations of Jane Eyre, I took the advice of The Enthusiast’s Guide to Jane Eyre Adaptations. I went with her top two recommendations.

Jane Eyre (2011) was a good movie. Of course–as is often a problem–Jane and Mr. Rochester were too handsome for their roles, but other than that I have no real complaints. It stuck pretty close to the book, down to lines, and it put a face and costume and scenes to the characters and time period. It also introduced (to me) the idea of beginning with the fourth section and–although it did not carry the process all the way through–I thought this was a wonderful change. Recommend.

I am still watching the 1973 BBC miniseries of Jane Eyre, and will review it when I am done.

“Vain favor; coming, like most other favors, long deferred and often wished for, too late!” (p27).

“‘It is far better to endure patiently a smart which nobody feels but yourself, than to commit a hasty action whose evil consequences will extend to all connected with you–and, besides, the Bible bids us return good for evil'” (p67).

“‘Why, then, should we ever sink overwhelmed with distress, when life is so soon over, and death is so certain an entrance to happiness–and glory?'” (p84).

“…suggested the thought that Hope traversed them at night, and left each morning brighter traces of her steps” (p91).

“…had courage to go forth into its expanse to seek real knowledge of life amid its perils” (p101).

“It is as if I had a sting somewhere under my left ribs, tightly and inextricably knotted to a similar string situated in the corresponding quarter of your little frame. And if that boisterous channel and the hundred miles or so of land, come broad between us, I am afraid that cord of communion will be snapped; and then I’ve a nervous notion I would take to bleeding inwardly'” (p295).

“‘Of yourself, you could come, with soft flight, and nestle against my heart, if you would; seized against your will, you will elude the grasp like an essence; you will vanish ere I inhale your fragrance'” (p370).

“‘He is a good and and a great man; but he forgets, pitilessly, the feelings and claims of little people, in pursuing his own large views'” (p481).