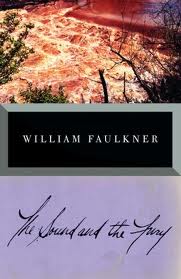 The Sound and the Fury, written by William Faulkner, the corrected text published by Vintage International in 1984, but originally published in 1928 and (the Appendix) 1946.

It is shocking how long it took me to get into this book. I don’t really like to know too much about a book before I read it, but without some background information, I found this book almost impossible. However, once I figured out that the stream of consciousness narration would not last the whole novel, I was able to move ahead and even enjoy parts of it.

I find myself wondering what about this book makes it one of the best American books ever written. The only two answers I can come up with are: 1) It is historically important to an understanding of the South between the Civil War and modern times; 2) It is important to literature for the advancement of stream of consciousness writing and various other (then) experimental types of writing (change in point of views, experimentation with punctuation, etc.). It was difficult to enjoy, certainly, but there is a kind of brilliance here, none the less. If you enjoy American history or  literature for literature’s sake, this is a good read. If you want to chill at the beach, don’t bother packing it.

For one thing, it is almost completely depraved. If books succeed based on whether or not people love and identify with the characters, then this book–like a lot of other literary fiction–makes no sense to the masses. There are some beautiful passages, but not enough for me to like it for that reason. What I did like, eventually, was the way the four sections worked together to make a whole story; one you wanted to see come to a conclusion (which, again like lots of literary fiction, sort of did and sort of did not). I enjoyed how we started out on one day, back-tracked to a day in the past when a very pivotal event happened, came back to the day before the first day, and ended with the day after, and how it mattered who was dictating the events of each day.

I have to say I do not agree with Faulker’s adding the Appendix some twenty years after the publication of the book. I think it’s a bit boring and unnecessary. I don’t think he adds anything to the book with the family history, even though he claims it is the “key” to the novel. We already get or feel or understand all that he adds later.

About the innovative use of language: The first section is narrated–in stream of consciousness–by a severely mentally handicapped character. I think you can see how it is then extremely challenging to read and follow. The next section is narrated–again in stream of consciousness–by a neurotic character who is slowing deteriorating into depression and eventually suicide. A little easier to read, but not by much. Lots of people consider this an even more difficult section than the previous. Third section, finally some narration that is not stream of consciousness (swooping between Jason’s thoughts and what is happening around him), but is still narrated by a greedy, cold-hearted racist. Last section finally has an outside narrator. Faulkner also uses italics, lack of punctuation, lower case letters, and writing dialect to create a pretty crazy piece of 1920s literature. As a modern reader, I find tricks like these to be more distracting than effective (especially the dialect). Because of all these bells and whistles, I strongly suggest a character list before delving into the first section. Faulkner is also a bit the king of run-on sentences.

And when I think about it, the majority of story in this novel is what I might think of as back-story. In other words, there’s not a whole lot of plot development, just mainly character development and musings on the deterioration of the old South.

“Because no battle is ever won he said. They are never even fought. The field only reveals to man his own folly and despair, and victory is an illusion of philosophers and fools” (p76).

“You cant know and he said Yes. On the instant when we come to realize tragedy is second-hand” (p116).

“They all talked at once, their voices insistent and contradictory and impatient, making of unreality a possibility, then a probability, then an inconvertible fact, as people will when their desires become words” (p117).

“It was nothing. Just sound. It might have been all time and injustice and sorrow become vocal for an instant by a conjunction of planets” (p288).

“Along its quiet length white people in bright clumps moved churchward, under the windy bells, walking now and then in the random and tentative sun” (p290).

“Dilsey sat bolt upright, her hand on Ben’s knee. Two tears slid down her fallen cheeks, in and out of the myriad coruscations of immolation and abnegation and time” (p295).

The title is to have come from Shakespeare’s Macbeth: “Tomorrow and tomorrow and tomorrow, / Creeps in this petty pace from day to day / To the last syllable of recorded time, / And all our yesterdays have lighted fools / The way to dusty death. Out, out, brief candle! / Life’s but a walking shadow, a poor player / That struts and frets his hour upon the stage / And then is heard no more: it is a tale / Told by an idiot, full of sound and fury, / Signifying nothing.”  But there is also this: “Jason told him, his sense of injury and impotence feeding upon its own sound, so that after a time he forgot his haste in the violent cumulation of his self justification and his outrage. The sheriff watched him steadily with his cold shiny eyes” (p303).